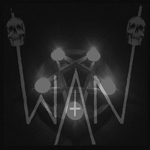 One of my favourite scenes from the motion picture “Scarface” is Elvira Hancock dancing with Tony Montana and after she told him her name he says “Hancock… sounds like a bird…”. Well, here we got WAN and WAN sounds like – at least not like a bird. Perhaps the name refers to the well-known Jedi-Knight Obi-Wan Kenobi? Maybe some strange acronym? Or the guys just picked that name to sound cryptic as hell. The unholy WAN. But song-titles like ‘Pentagram Rockers’, ‘Pagan Metal Damnation’ or ‘Djevelsang’ should give a hint to the style of music. Heavily eighties influenced Black / Thrash Metal. In a time when bands like VENOM, SODOM, HELLHAMMER, SEPULTURA or BATHORY did not care about fulfilling any expectations but just to unleash hell like the Romans did at the beginning of the movie “Gladiator”. According to the band “Enjoy The Filth” was recorded within two days. First the instruments in some kind of drunken and screwed live session, whereas the vocals where added later. “Enjoy The Filth” is the second release by this Swedish old school Thrashers and if you like the above mentioned bands you should definitely take a listen. www.reverbnation.com/theunholywan, www.facebook.com/carnalrecords.sweden