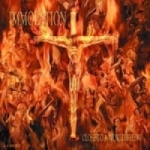 IMMOLATION
Close To A World Below
(Metal Blade Records)
41:53min

IMMOLATION is still one of the most underrated Death Metal acts worldwide and their fourth album “Close To A World Below” proves this thesis. Ross Dolan, Robert Vigna & co. came up again with the most evil, eerie, obscure, haunted and bewitched ghost Death Metal you can imagine. Songs like ‘Higher Coward’, ‘Father, You’re Not A Father’, ‘Furthest From The Truth’, ‘Fall From A High Place’, ‘Unpardonable Sin’, ‘Lost Passion’, ‘Put My Hand In The Fire’ and the devastating title track (oops, that’s already the complete album!) are on the one hand the most technical, complex and original Death Metal tunes you can imagine, on the other hand I guess terms like ‘brutality’ or ‘extremity’ never fitted better before than to these guys from New York City. But I’ve to admit that you need an especially destructive mood to consume this monster! Also the critical lyrical concept and the imposing cover artwork by the Marschall brothers are outstanding compared to the faceless Death Metal majority. “Close To A World Below” contains eight anthems of sheer mass psychosis and is for sure one of the most extreme, original and alarming albums ever in the entire Death Metal history!