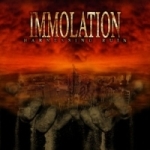 Even the biggest IMMOLATION critics will have to confess now that these guys slowly but surely managed to establish their very own unique style throughout the last couple of years. Let’s face the facts: there’s absolutely no other brutal Death Metal band around nowadays that could be compared to IMMOLATION’s vision of this dark and brutal form of music. Long time gone are the days when Ross, Bob and the rest of the guys had to live with (mainly pretty unjustified) reviews in which they constantly got compared to MORBID ANGEL… In fact, IMMOLATION anno 2004 / 2005 differ pretty much from the band that used to come up with classic tracks like ‘Burial Ground’, ‘Dispondent Souls’, ‘Into Everlasting Fire’ or ‘Internal Decadence’ in the late 80s, early 90s. Their new style is a whole lot more varied and Ross Dolan’s charismatic, brutal voice kinda like the last remaining ingredient from those glorious days of simple, straight ahead brutality. Not even the various line-up changes (especially in the drum department) could stop them from progressing so drastically and it seems that the intensive touring (on one hand) and the fact that they have very much “grown up” as musicians (on the other) lead to this impressive result. “Harnessing Ruin” is without a doubt their most matured sounding piece of music, but personally took me quite a while to get into. Not exactly because it features new drumwork by Steve Shalaty (who already helped them out live in the past) or because it all became more complex or something… It’s mainly because I always loved the aforementioned old shit so much and unlike many others wasn’t completely satisfied with the overall new direction they were heading to lately. But after I had listened to the nine new tracks countless times, the album finally started to grow on me A LOT! Ok, to me the clear, yet very apocalyptic sounding production could need a little more heaviness here and there (especially in the drum sound, which got a bit buried in the mix), but musically speaking this is still very impressive stuff! What really sets IMMOLATION apart from all the other brutal Death Metal acts is definitely the often quite disharmonic / dissonant sounding guitar work, which is not the typical downtuned stuff, but a lot closer to a band like VOIVOD than SUFFOCATION or DEEDS OF FLESH for example. Just check out ‘Our Savior Sleeps’ or ‘Challenge The Storm’ (which are both good examples for this) and you’ll know what I’m talking about… Additionally their rhythm section mostly creates a very groovy (yet still very dark) musical foundation, which you don’t get to hear from all the other blasting Death Metal acts either. Same obviously goes for the whispered passages and acoustical opening / ending in the song ‘Dead To Me’. Very unusual shit, even for a band like IMMOLATION! My personal highlights on this new album are ‘Challenge The Storm’ and the title track ‘Harnessing Ruin’, because both simply represent all the band’s strongest trademarks in the best balanced way. Too bad they still seem to refuse the use of their classic old bandlogo and even went for a more modern approach in the coverart as well this time. Apart from those little points of criticism this has become another milestone in Death Metal history! Label contact: www.listenable.net