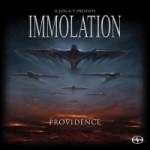 When it comes to bands with an almost institutional reputation, IMMOLATION’s name invariably comes up. Since 1988 the band has unveiled masterful album after masterful album. Their most recent full length, 2010’s “Majesty And Decay” was a thunderous new installment which, as its title suggested, sounded large and imposing; majestic even. “Providence” seems to be a continuation of the “Majesty And Decay” sessions, with artwork done by Pär Olofsson, the very same man who painted the cover for “Majesty And Decay” as well as IMMORTAL’s 2009 comeback “All Shall Fall”. The first song, ‘What They Bring’ gets the ball rolling nicely: drums are polished, perhaps triggered, but loud and impressive in the mix; Ross Dolan’s vocals are as menacing as ever, while Robert Vigna’s riffs are dark, discordant, and yet somehow almost orchestral in their arrangements. The song ends on a suffocating note, giving way for ‘Illumination’, another proudly defiant, anti-religious song in the IMMOLATION tradition. However ‘Illumination’ has some odd parts, namely those which sound like a section of classical music. Don’t worry, die-hard fans, it’s a nice touch, and upon further listening, one can see how well it fits IMMOLATION’s music. Next, ‘Still Lost’ delivers a blurry three minutes of fast and haunting Death Metal, then the title-track, ’Providence’, counterbalances the fury of ‘Still Lost’ with graceful, majestic, but of course sick and dark harmonics. In particular, ‘Providence’ shows the link between the EP and the “Majesty And Decay” album. Indeed, ‘Providence’ strongly resembles ‘The Rapture Of Ghosts’ featured on “Majesty And Decay.” Finally, the last song finishes things off. ‘Swallow The Fear’ is rhythmic and constant in speed, like a Death Metal steamroller. Everyone needs a little immolating from time to time. To get your fix, do yourself a favor and check this out (it is available as a free download and was also given away for free as a physical CD at IMMOLATION shows when the band toured North America in 2011 – Frank)! For all further info, check out http://twitter.com/immolationband, www.facebook.com/immolation, www.everlastingfire.com, www.scionav.com