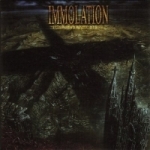 The present avalanche of mediocre releases makes this album even more precious. I use the term masterpiece very scarcely, but this time I can do it without any second thought. IMMOLATION belong to the elite of the Death Metal bands, I see for now only NILE being able to rival them regarding originality and musical abilities. “Unholy Cult” is certainly not another mundane album, but a journey through a sick and disturbing soundscape, a nightmarish trip across new musical dimensions. On “Unholy Cult” you will hear what you have never experienced before, like strange rhythms patterns (the drumming is PHENOMENAL), Black Metal guitar playing injected into a technical Death Metal mold (like in ‘Unholy Cult’, an eight minutes long descent into madness), chaotic melodies that will give you with the gooseflesh. The overall atmosphere of “Unholy Cult” is made of pure fear and demonic possession, I can guarantee you will not get out of this without mental scars. I dare to say that the album will stay as a revolutionary one, the next step in the Death Metal evolution. IMMOLATION blow away their competitors thanks to their obvious intelligence and talent. I didn’t have access to the lyrics unfortunately, but only reading the song titles it is evident IMMOLATION stay obsessed by the topic of the eternal battle of Good versus Evil and the futility of religions, choosing a theological and philosophical approach rather than the theatrical and overused Satanism angle. My favorite song is ‘Rival The Eminent’ with its demented drumming parts and dissonant melody lines, but be sure all the tracks sound equally good and captivating. Even the raw production doesn’t harm the musical brilliance of this record, the proof of the superiority of the song writing over the production wizardry (this one the more often used to hide flaws and inefficiency). The elegant Andreas Marshall artwork appears simpler than usual, like if the painter would have liked to cause minimal interference between the music and us. In fact, I realize it is impossible to really sum up what “Unholy Cult” actually is, how much this album reveals itself rich and complex. One hearing is certainly not enough to fully grasp the magnitude of such a musical work, be prepared for long listening sessions. This is by far the best IMMOLATION effort that surpass in excellence their yet already fantastic previous efforts. This is a milestone not only of Death Metal, but of Metal pure and simple, a real musical accomplishment. I think all is said really. Join the unholy cult, or die!