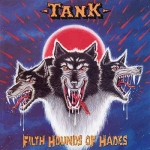 I really hope that there is no need to explain, who and what TANK is. Call them a legendary Heavy Metal band, founded by Algy Ward in 1980, who had his roots in the London based Punk scene in the seventies, where he played with THE DAMNED. Which, in fact, were really closely related to former HAWKWIND bassplayer Lemmy Kilmister and his at this time new band MOTÖRHEAD. This fact is neccessary to know, because MOTÖRHEAD guitarist Eddie Clarke made his first steps as a producer with TANK’s first album and the ‘Don’t Walk Away’ single. “Filth Hounds Of Hades” was released in 1982 and combines the rough Punk attitude with the upcoming Heavy Metal movement and a lot of people are still convinced, that this album is the best they did. Songs like ‘Struck By Lightning’, ‘Shellshock’ or the title-track are spontaneously powering forward, ignited by the possibilities the Heavy Metal movement was giving them musically, especially in the guitar-work. TANK were always considered to sound more like MOTÖRHEAD than having too many similarities with other bands from Great Britain in those days. Together with VENOM one needs to say, that Algy and his crew were inspiring a lot of young freaks back in those days to start their own bands. Tom Angelripper and SODOM is only one of them, he already covered two songs from this album in the run of his career (‘Don’t Walk Away’ and ‘Turn Your Head Around’). Needless to say that some quality re-releases were neccessary to keep the album alive after all these years. This new High Roller Records edition was cleaned, restored and re-mastered by Patrick W. Engel and released as a jewelcase CD with an extra slipcase, which features the black cover artwork (while the alternative color version can be found inside). The whole package also includes a small poster of the cover artwork and no less than ten bonus tracks from the band’s early 7″ singles, including demo versions of ‘Run Like Hell’ and ‘Blood, Guts And Beer’. The fat booklet features tons of old pictures, an interview with original drummer Mark Brabbs and all the lyrics. The vinyl edition comes in different colors and includes an additional 10“, together with two double-sided posters and three photo cards, which are nice to look at. And last but not least, for all you collectors out there, there is a picture shape vinyl edition, also available from High Roller, containing six tracks. Strictly limited, so like another famous band from Great Britain once was singing: be quick or be fuckin’ dead! www.facebook.com/tankfilthhounds, www.facebook.com/hrrecords