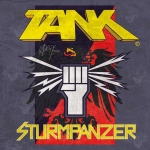 Five years after the return of the “real” TANK in form of Mr. Algy Ward as one-man band, the problem of the two bands named TANK still is unsolved. Cliff Evans and Mick Tucker still do their version and Algy still claims that he is the only one to play under that moniker. Well, for one thing, he’s pretty right, yet this situation is still unbearable for all the old fans of the band. The “unreal” TANK releases albums that aren’t worth the name of the band while the “real” TANK just released a second solo album that is not worth the legendary name either. At least “Sturmpanzer” has some nice moments, more than “Breath Of The Pit” five years ago. There are songs like the opening ‘2000 Miles Away’, ‘First They Killed Her Father’ or the two-parted title-track that invoke the spirit of old times, classic TANK songs about war. The softer ‘Lianne’s Crying’, ‘Living In Fear Of…’ and ‘The Last Soldier’ with its lyrical hints on the band’s history fit the musical style of the old days, yet they are a little mediocre and cheap sometimes. These songs are the ones that most suffer from the general problem of “Sturmpanzer”: the sound! I mean, it is 2018, and production technique has made so much progression that a sound without high tones and depth is nothing but an imposition. And this programmed sounding drums are an absolute no-no. Additionally we have modern and experimental songs like ‘March’, ‘No More War’ or ‘Which Part Of F.O. Don’t U Understand?’, the kind of stuff that already ruined “Breath Of the Pit”. And in the end, the “Sturmpanzer” really runs onto ground. The THIN LIZZY cover ‘Little Darlin” is nothing but a bad joke to my ears, since it is very carelessly played. And the final instrumental ‘Revenge Of The Filth Hounds Pt.1’ is a puzzle of patched-up samples and loops from the history of TANK that might sound nice in the beginning, but after two or three minutes, I was really pissed by this botch job. Well, this song has an even more redundant second part, which serves as an outro and mainly consists of a dial tone. So, despite three good to very good tracks, Algy’s vision of TANK 2018 is not mine. I can only repeat myself: c’mon guys, get your act together and do the ultimate TANK album of the new millennium! More info at www.tankfilthhounds.net or www.dissonanceproductions.co.uk