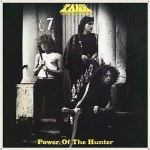 New Wave Of British Heavy Metal statesmen TANK have had their sophomore album “Power Of The Hunter” reissued on double vinyl and CD (with bonus tracks) on High Roller Records. This reissue is remastered and the vinyl edition comes with an additional 7″ of two bonus tracks (in my opinion, if anyone is going to do a reissue of an album, they should include bonus tracks; demo tracks, live tracks, outtakes, b-sides, etc). For those of you not familiar with TANK, they fall in line with other artists of the same era / genre, like MOTÖRHEAD, RAVEN, DIAMOND HEAD and SAXON. I had not really heard much from TANK until this album landed on my desk. The previous songs I had heard from TANK came via a mix tape from the mid 90s, that I got from a former maintenance man from my old apartment complex (shout out to Ricky for the mix tape). The first song here is ‘Walking Barefoot Over Glass’ and right off the bat you can tell these guys have a more Rock’n’Roll vibe than a NWOBHM feel. Honestly, I think this album would have been better suited if it was released in 1976 / 1977 as it has the vibe of the music around that time frame. The whole album grooves well, the vocals are crisp, the bass sounds really good on this song and the drums are perfectly mixed into the scenario. Don’t expect insane guitar / drum tempos like you would with MOTÖRHEAD or VENOM as these guys are more into slowing things down to a mid-tempo and letting the music flow organically. The lyrics are typical for the era (partying, women and politics / war) and to me the stand out tracks are ‘Biting And Scratching’, ‘Used Leather (Hanging Loose)’ and ‘Power Of The Hunter / Oh, What A Beautiful Morning’. The verdict: this is a good album to jam to, but if you are expecting the ferocity of MOTÖRHEAD, VENOM or WARFARE then you are better off skipping this one. It’s not a bad album, it’s a fun jam album that you can listen to while changing out the oil in an old 1984 Chevy Camaro. As previously mentioned this is the remastered version of the album, which kicks it up a notch and worth the purchase if it’s your cup of tea. For more info: www.facebook.com/tankfilthhounds, www.facebook.com/hrrecords