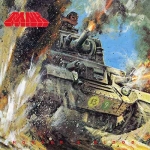 It’s absolutely hard for me to deny that deep in my heart I always was a great fan of the early years of TANK. Discovering a Metal band at the crucial age of 12 (or even earlier) always means you’ll love their music as a grown up Metalhead and probably this love will last until you’re dead and gone. The songs Algy and his guys recorded in those glory days of Metal are among the finest stuff of the era, “Filth Hounds Of Hades” and “This Means War” will be mentioned any time when old geezers recall the great early years of TANK. But the fourth album “Honour & Blood” that was released in 1984 always seems to be overlooked a little bit. With absolutely no justice, in my eyes. Of course the furious first recordings Algy did with the two brothers Brabbs (“Filth Hounds Of Hades”, “Power Of The Hunter” and a lot of singles) were really impressive, powerful stuff with a good bias of MOTÖRHEAD and a raw Punk attitude. Adding former AXIS member Mick Tucker as a second guitar player made the sound of TANK a lot more variable and elaborate, finally rooting the band in the NWOBHM movement without any doubt left. The album “This Means War” that was recorded by this line-up is of course a masterpiece. But just a little later trouble was in the air, the brothers Brabbs left to be replaced by drummer Graeme “Crash” Crallan and Cliff Evans on guitar. This line-up took the sound of TANK even more further while still staying true to the formula found on “This Means War”. “Honour & Blood” is the demonstration of the qualities of this line-up. And the A side of the album was, is and will always be top notch! A synthesizer intro is the overture to the driving ‘The War Drags Ever On’ with its iconic first line: “A war is raging that we don’t understand!”- right now this is more true than ever. But the song itself has not lost a tiny bit of its impelling fury in the last 38 years and the guitar battles still are the finest state of the art. Probably the greatest song TANK ever wrote. With the mid tempo based stomping ‘When All Hell Freezes Over’ and the quite epic ‘Honour And Blood’, the war based trilogy continues on a nearly as fine level. These two songs can easily compete with the ones of the predecessor. It’s up to the four songs on the B side of the original album to document the evolution of the band’s songwriting, namely ‘W.M.L.A. (Wasting My Life Away)’ and ‘Too Tired To Wait For Love’. It’s not only that they deal with a different problem of life: the search for love. Also musically they are more grown up. ‘W.M.L.A.’ is the most “soft” song TANK wrote to that day, yet also the most emotional, which is still getting me nowadays. And the great ‘Too Tired To Wait For Love’, even though still being TANK, might have been a hit in 1984 but wasn’t released as a single. In addition we find a cover of ‘Chain Of Fools’, made famous by Aretha Franklin, that fits the two songs mentioned. It might have been a risk recording this cover, but it was a successful risk, in my opinion. The album gets finished by the long, rather epic and definitely melodic ‘Kill’, a worthy end to an album that still sounds more than great after nearly four decades. And guess what, my friends: now anyone has the chance to get this classic and timeless Metal album again, even if you’re living outside Japan. You can either fill the gap in your collection or get a new copy to save your strained original. The always dedicated High Roller Records even made a new vinyl edition of “Honour & Blood”, in all its original glory without any bonus tracks that might spoil the joy. Visit www.facebook.com/tankfilthhounds or www.facebook.com/hrrecords