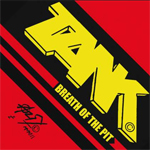 Another heroic band of my early youth is back. Or should I say: back twice? TANK were, alike ANVIL, one of those old heroes I used to listen to when I was 12 or 13 years old. Until 1987 they did very fine and released five albums including my personal all time classics "This Means War" (1983) and "Honour And Blood" (1984). After that, TANK took a ten year break and reunited for another ten years after their comeback at the Wacken Open Air 1997 with founder and frontman Algy Ward plus Mick Tucker and Cliff Evans, the guitar duo that recorded their best albums. In 2007, Algy finally left the TANK due to poor health. What should have been the end of TANK ended up with Tucker and Evans recruiting Doogie White for vocal duties and continuing under the name that is personalized with Algy Ward. These so called "TANK" released stuff that isn’t one bit worth the legendary name and extremely pissed off Mr. Ward. So Algy proclaimed the "Return of the true TANK" to release the "definitive" new TANK album. Everything on "Breath Of The Pit" was done by Algy himself, including the production in company with Guy Denning. Sadly Algy does not do the name TANK a big favour with this album. The whole album sounds unfinished, like some demo recordings that were released hastily. Just take the name giving opener ‘Breath Of The Pit’. It starts off in best TANK manner with a riff that would have fitted the old albums perfectly. But then Algy tries to experiment with Industrial ideas which leaves the song like a combination of two unfitting fragments. ‘T-34’ and ‘Kill Or Be Killed’ sound a little more organic, but they reveal the problem that this album is troubled with: the lack of power and a pretty clinical drum sound. ‘Healing The Wounds Of War’ or ‘Crawl Back Into Your Hole’ are a little better, with a bit more power, but they can’t disguise that this whole album sounds incomplete. The boring, unproduced sounding instrumental ‘Circle Of Willis’ finishes the album somehow fitting. It’s sad to see a legend ending like this. C’mon guys, get your act together and do the ultimate TANK album of the new millennium! Check out www.tankfilthhounds.net or www.plastichead.com