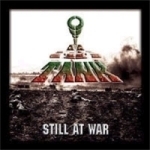 I’ve been waiting for this record to get released for more than four years by now. Back then the legendary NWOBHM act TANK returned to the scene, toured Germany and even recorded a brandnew demo. That tape only featured two songs (the ok sounding ‘In The Last Hours Before Dawn’ and the raging ‘And Then We Heard The Thunder’) and originally was supposed to get them a new record deal. But it seems that labels these days are even more into signing faceless bullshit which fits into the mass appeal madness than investing a little bit of money on a unique sounding steady band from the glorious days of Heavy Metal. So, except for announcements that TANK would be releasing a new album entitled “Still At War” unfortunately nothing really came out of that for quite a while. Instead two great live albums were issued in 1998 and 2001 respectively (“The Return Of The Filth Hounds”, which also featured the aforementioned demo tunes and “War Of Attrition – Live ’81”), and I already figured that “Still At War” would never become reality. But luckily I was wrong and the wait is finally over! The new Japanese label Spiritual Beast Records (as well as Zoom Club Records in Europe) released TANK’s sixth official studio album, a fact that all the loyal filth hounds around the world will certainly appreciate immensely! And it was definitely worth the wait! Killer tracks such as ‘Light The Fire (Watch ‘Em Burn)’, ‘Still At War’, ‘Conspiracy Of Hate’, ‘And Then We Heard The Thunder’ or ‘Return Of The Filth Hounds’ could also have been leftovers from their glorious days and by no means come up with any annoying, crappy modern elements (ZZ TOP fans will notice a little inside joke at the end of ‘The Fear Inside’ though). Lyrically you’ll get a bunch of very serious, critical pieces, such as ‘The Blood’s Still On Their Hands’ (about Hitler’s extermination of the Jews), ‘When The Hunter Becomes The Hunted’ (Vietnam) or ‘Still At War’ (which deals with the fact that the world is still at war), but on the other hand there’s also the usual “band on the road” type stuff (‘Return Of The Filth Hounds’). So, even though Algy and the gang probably won’t ever manage to recapture the old raw intensity that made their debut “Filth Hounds Of Hades” so popular (especially among fans of MOTÖRHEAD, KILLER [B] and the likes), “Still At War” still became another very typical and highly enjoyable TANK album. And as not even the change in the band’s line-up did hurt them in any way (drummer Steve Hopgood got replaced by Bruce Bisland, who’s previously been with WEAPON, STATETROOPER, PRAYING MANTIS, ANDY SCOTT’S SWEET), I advice every die hard TANK fan (and real worshippers of Metal alike!) to pick this up right away. This Japanese edition even comes up with two additional tracks: ‘C-Ing Dubb-All’ and ‘Still At War (Single Mix)’… But hey, now it’s really time to re-issue TANK’s self-titled 1987 album on CD as well, don’t you think? Label contact: www.spiritual-beast.com, mail@spiritual-beast.com