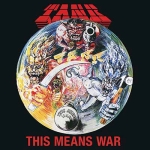 Heavy Metal powerhouse TANK were one of the originators along with the likes of SAXON, ANVIL and RAVEN. Like their contemporaries of the NWOBHM era, TANK also shaped and forged their sound in the 100% traditional way with passion and total commitment to the moment. But what sets them apart from the whole NWOBHM movement, was surely their adrenaline fueling raw intensity. No wonder why their first four official full-lengths are regarded as classic blueprints of Metal which embody power, persistence and no-compromise. Now, High Roller Records are offering a highly tempting reissue of their third full-length “This Means War”, originally released in 1983. You can pause to reflect that this album is almost 40 years old! That also makes it hard to believe, because the original version still sounds very refreshing. So, what more onlookers can find from this cleaned, restored and re-mastered edition (by Patrick W. Engel at Temple Of Disharmony) of this eternal classic. It’s the boost in the unmistakable sound of TANK. Also, to remind again, the heavy intensity TANK captured on this record, none can replicate. Interestingly enough, while their earlier stuff had its firm roots in Punk, in 1983 the band was on route to make “This Means War” as fist-pumping heavy as the previous two albums. So, on this album, the classic three-piece line-up was extended to four, with the addition of second guitarist Mick Tucker (ex – WHITE SPIRIT). Remarkable enough history inside, they also made that move with hopes that by being a 4-piece it would rid them of the ‘Sons of MOTÖRHEAD’ tag that the British press insisted on using. Whether that hope realized or never counted, with this new front the guitar duo of Mick Tucker and Peter Brabbs brings out the heavy TANK out of crumbs. They stopped continuing to indulge in the MOTÖRHEAD – esque mix of Metal and Punk. Instead, the new incorporation of a second guitar (with soaring solos and hooks) into their music truly amplified their uniquely heavy and intense song structures. Undoubtedly, elements from here, transitioned into the later Speed and Thrash Metal wave, which was just breaking over frenetically all around. Instantly, all that can be felt, while enjoying the upbeat anthems like the 8-minute opener ‘Just Like Something From Hell’, the brilliantly titled ‘Laughing In The Face Of Death’, the pulsing dexterity of ‘Hot Lead, Cold Steel’ (and, its lyrical prowess), subtility of ‘Echoes Of A Distant Battle’ or that defying legend of title track with the unmistakable voice of the front man Algy Ward. It’s no wonder that countless fellow musicians and filth hounds will always swear by TANK of that era. This re-issue will also surprise more (apart from electric blue / black marbled vinyl, booklet, double sided poster) with the presence of two bonus tracks entitled ‘The Man That Never Was’ and ‘Whichcatchewedmycuckoo’ (oddest title ever!). TANK hoarders, be warned. Explore more about the band and label here: www.facebook.com/tankfilthhounds, www.facebook.com/hrrecords