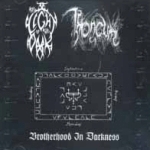 THRONEUM / THE LIGHT OF THE DARK
Brotherhood In Darkness
(Devil Worship Productions)
38:56min

Well I’ll try to keep it short on this one, because this tape is so boring and mediocre that it should appeal only to total THRONEUM lunatics. I don’t think that THE LIGHT OF THE DARK have that many fans. THRONEUM are a Polish underground Death Metal band, that performs middleclass old school Death Metal, they are around since 1996 and released their full-length debut in 2002. Their songs rush through my ears and do not affect me in any way, they are ok, but unfortunately nothing more. THE LIGHT OF THE DARKNESS are even worse, hectic and chaotic Black / Death from Mexico that simply sucks with its incomprehensible song structures. Layout and sound quality are really good, so that this split MC might appeal at least to total THRONEUM maniacs or collectors. Some songs like ‘Hail Old Spirits’, ‘Mutiny Of Death’ or ‘Light And Cause’ even appeared on previous THRONEUM offerings which worsens my already negative impression of this release – it’s absolutely superfluous!!! If you would like to get more information about "Brotherhood In Darkness" or THRONEUM’s other releases despite this bad review, check out www.geocities.com/throneum/, an excellent website with MP3 files, biography, discography and shit like that – "worth a surf".