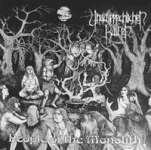 This is the 4th chapter and current release from UNAUSSPRECHLICHEN KULTEN which I got from the band. Don’t exactly know why “Wake Up In The Night Of Walpurgis” was chapter III and “People Of The Monolith” is chapter IV as I read that they had 3 demos / releases before this which would mean that this new release should be chapter V. Perhaps an interview can answer that problem, haha! The name UNAUSSPRECHLICHEN KULTEN, by the way, is taken from the fictious book with the same title. It is supposed to be published 1839 in Düsseldorf, Germany written by Friedrich von Junzt. When having a search for information about this book I have serious doubts that this release ever existed as the name “Unaussprechlichen Kulten” is in the German language but grammatically not correct and I think no native speaker would use a grammatically wrong name for his book. Never mind, fictious or fact, I’m no expert here and the reason why the band took this name as their moniker might occur as they are huge fans of H. P. Lovecraft and this author always gets mentioned when talking about this book. An interesting topic, definitely, perhaps I need to look deeper into this subject and not only reading a few books from Lovecraft. Hm… Highly influenced by Lovecraft might also mean highly influenced by MORBID ANGEL, but I’m not really sure here. As I wrote in the review for “Wake Up In The Night Of Walpurgis” that UNAUSSPRECHLICHEN KULTEN are the closest comparable with names as SADISTIC INTENT, IMMOLATION or INCANTATION I still can say that this is also the case for this newest chapter though the tunes get a little bit more weird, sometimes disharmonic here and there and at those parts MORBID ANGEL come to my mind. Anyhow, it’s brutal Death Metal performed by musicians who know how to handle their instruments. The sound itself is cool as it is not such an overproduced recording which you hear so often these days. Again we have such a great looking and great layouted (or call it strange?) 7″ EP size digipak gatefold sleeve cover which I haven’t seen before those 2 releases. The coverdrawing is great, too, and was painted by the rising artist Self Desecrator which you see more often on Death and Black Metal releases these days. All I can say is that this is a band to support and to check out if you are a fan of the mentioned bands. It’s high quality Death Metal with a huge underground feeling. I’m not sure if I like this new release more than the one before, but what I’m sure about is that each reader of Voices From The Darkside won’t do a mistake by ordering chapter III and IV all together. From my point of view the music of UNAUSSPRECHLICHEN KULTEN would work even better on vinyl!! Joseph, what do you think about that? Get in touch with joseph_curwen@hotmail.com or butcherofchrist_@hotmail.com to ask for ordering details.