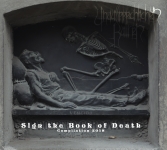 UNAUSSPRECHLICHEN KULTEN is a very interesting band from Chile and, although they’re active for less than two decades, these guys from Santiago have made quite a name for themselves in the Death Metal underground scene. Just think that in 17 years they’ve released: four full length albums, five demos, three splits, one EP and two compilations. “Sign The Book Of Death” is their last CD collection, recently released by Apocalyptic Productions from Chile. This "best of" contains tracks from: the albums “Keziah Lilith Medea – Chapter X” (2017) and “Baphomet Pan Shub-Niggurath” (2014), the EP “Lucifer Poseidon Cthulhu" (2013), the split with AFTER DEATH entitled “Dwellers Of The Deep / The Madness From The Sea” (2012) and various live tracks recorded in Chile between 2013 and 2016. For sure UNAUSSPRECHLICHEN KULTEN is a solid band, but I think it should be debated the necessity of releasing an album that collects songs recorded only a few years ago. We’re talking about some pretty recent items, that are probably still available for sale. But, you know, if we consider a "best of" release as a mere sample of a band’s discography, yes, it makes sense. Musically, UNAUSSPRECHLICHEN KULTEN plays an intense form of old school Death Metal with a very marked South American touch. Imagine a mixture between IMMOLATION, MORBID ANGEL, INCANTATION, SADISTIC INTENT, VITAL REMAINS, NOCTURNUS and Latin American stuff in the vein of HADEZ, MORTEM, MASACRE, SARGATANAS, SHUB NIGGURATH, TRANSMETAL, PENTAGRAM and ANAL VOMIT, just to name a few. It’s a very coherent style of Death Metal, both brutal and obscure. Two more bands from South America come to mind: POISONOUS from Brazil and DIABOLICAL MESSIAH from Chile. As required by the genre, there are also some slow parts in the vein of AUTOPSY and some melodies à la NILE, but the strongest point of this band are the fast parts, which highlight the real heaviness and brutality of these Chilean guys (a boon to KRISIUN worshippers). The lyrics deal with occult and Lovecraftian themes; all written in English, Spanish and R’lyehian (nothing very original, though). In conclusion, I think that this collection is worth buying only if you’re interested in the unreleased live tracks or if you’re a completist. Otherwise, it would be wiser to get the complete releases and not just two or three songs from each title. By the way, UNAUSSPRECHLICHEN KULTEN is a killer band – one of the best that has recently come out – and it deserves your support. For more info: www.facebook.com/unaussprechlichen-kulten-609345889079874, www.facebook.com/apocalypticproductions