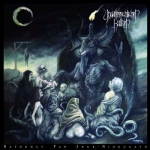 An album from UNAUSSPRECHLICHEN KULTEN is always something to look forward to! This killer band has released their third studio album with this one, "Baphomet Pan Shub-Niggurath”. The others were "Wake Up In The Night Of Walpurgis” from 2005 and "People Of The Monolith” from 2008. Besides these a bunch of EPs, splits and also a compilation from 2011 named "El Culto Sin Nombre – The Nameless Cult”. By now, the band is no longer unknown, but those who are unfamiliar with this quartet from Chile can expect brutal and pounding Death Metal which is lyrically inspired by the works of H.P. Lovecraft. That their style draws a heavy influence from INCANTATION is not relevant (any more) and absolutely nothing the band should be blamed for. Actually, many moments "Baphomet Pan Shub-Niggurath” reminded of MORTEM from Peru. Partly for a similar style of drumming and partly because of the morbid atmoshpere. A sphere that is moulded by both guitars and (a clearly distinguishable) bass that is handled with much class by newcomer Namru Impetradorum Mortem (ex – ADORIOR, ex – MAGNANIMUS, ex – OCCIDENS, ex – ORATEGOD a.o.). Guitar patterns spewing old school riffs are unleashed while competing with each other, which gives a great result. At times they reminded of IMMOLATION but like the previous comparison, this is irrelevant because UNAUSSPRECHLICHEN KULTEN should stand in none’s shadow with an album like this (and which was absolutely not the intention of these references!). The songwriting in these nine tracks is better than before and seems to evolve with each spin. Just listen to awesome tracks like ‘Yogge-Sothothe’, ‘Spirals Of Acrid Smoke’ or ‘Kadath In The Cold Waste’. The vocals of Joseph Curwen are also a big plus. Still deep and brutal, but this time more convincing than ever and with at least as much excellence as the rest on this record. They perfectly fit the production. After the silence hits you in the face after the last invocation in ‘Epilogue – The Oath of Dagon (First Oath) / Ia’, the need to listen to "Baphomet Pan Shub-Niggurath” didn’t leave after the first time. Something that rarely happens and hopefully explains the coolness of this record, your mandatory purchase and support for these guys! For more information check out www.facebook.com/pages/unaussprechlichen-kulten/609345889079874, www.compilationofdeath.cl