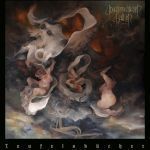 When you get your band name from a fictional Lovecraft book mentioned in a short story by Robert E. Howard, that’s simply some cool shit. And the band itself, UNAUSSPRECHLICHEN KULTEN, is even more cool. In a genre where the music tends to mimic the music that has come before, this Death Metal band is definitely in a league of its own. The guitars are all over the place, the drums reverberate like machine guns then stop abruptly before tumbling onward in an everchanging rhythm. And the vocals are rarely the same throughout. The band’s controlled a cult status since their first demo in 2001 and are only gaining more and more respect as the years go on. ‘The Evil Out Of Control’ starts their fifth full-length “Teufelsbücher” with some piano before thundering forth with mighty aplomb. Joseph Curwen’s guttural growls wade in and out of the almost tech-death guitars of Herbert West. Butcher of Christ’s drums and Namru Impetradorum Mortem’s bass keep the most unsteady rhythm you can possibly imagine. It really leaves you wondering how the fuck they write this glorious stuff. The vocals at the beginning of ‘Keziah Lilith Medea’ sound like a slithering, drunken snake-faced hobo. Yep, that’s right. But they meld into a more traditional Death Metal style quickly thereafter. ‘Cranquiluria’ is a vertigo-inducing swarm of off-kilter sounds that blend together in a hallucinogenic aural diversity. ‘A Search And An Evocation’ branches out in crunchy guitars, Cookie-Monster vocals and stuttering drums. ‘Flapping Membraneous Wings’ is a pretty epic track as ‘Necromancy And Torment’ involves more opening pianos leading into a stairway of blitzing guitars that fly and swoop through a plethora of riffs that lead in multiple directions, yet providing a satisfying ending to a solid album. Listeners familiar with this band know to expect the unexpected. New fans can gently dip their toe in the acidic spit of this demonic presence and slowly inhale the pleasures of each and every new sound entering their mushy brains. UNAUSSPRECHLICHEN KULTEN… I can’t pronounce your fucking name, but I sure as hell will travel your path. For more info, check out www.facebook.com/unaussprechlichen-kulten-609345889079874, www.ironbonehead.de