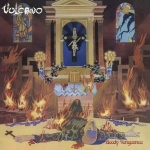 I cannot believe this is already 29 years old. Yes, the debut album from this band that started as a Heavy Metal act, is today one of the best material to come from the mighty Brazilian scene. With only 23 minutes long, this is their “Reign In Blood”. The recording is raw, but everything can be heard, specially a very loud bass, that adds more evil to the already malicious onslaught that this recording is. There is an obvious Hardcore approach here, but that was the time when it actually turned Metal more extreme by adding those elements in their music. Taking in count this was done in about 24 hours, it was a triumph (of evil) that this is still so brutal sounding. I am not sure, but for 1986 this as well might be the most evil recording to come out from planet earth. Compared to albums recorded or released in that same year, this is far ahead in terms of brutality and aggression. The fact that the band did not get bigger could be due to line-up problems and something that seems like style changes from album to album. Still, it is great that the album keeps being in print for the new generations to discover this evil jewel. The fact that the band is still going on today, even passing form some stages of releasing mediocre albums (“Ratrace”…), to then regaining the path of evil Metal, and even creating some modern masterpieces (“The Book Of Truth”…) makes these old Metal warriors living legends. This year they played the Maryland Deathfest and they have a new album out. Whilst not on par with the aggression and violence of their early albums, it is still worthy. But, this is where it all started. Find why they were ahead of their time and revered by those who know what Metal is all about. An essential release (this Greyhaze Records re-release even comes up with an approximately 45 minutes long bonus DVD, that offers a very raw, classic VULCANO live show from 1986. For obvious reasons the overall quality doesn’t live up to todays standards, as it was never meant to be released this way, but it’s still a great historical document that showcases how intense these guys were back in those days! – Frank). More info at: www.facebook.com/pages/vulcano/112863440430, http://vulcanometal.bandcamp.com, www.greyhazerecords.com