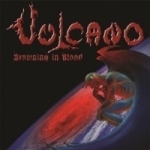 VULCANO defintely aren’t novices when it comes to playing extreme Metal, in fact, they were one of the first to do this in South America releasing their debut studio album "Bloody Vengeance" way back in 1986 (a live album had already been released a year before that – Frank). I remember that one passing me quite briefly in a sea of other more exciting releases from the 90s, mainly due to the fact that it sounded like shit to my ears. Very strange mix to say the least, so I didn’t try to get into it very much. It would be curious to have a listen to it again, maybe I’ll do so after laying down this review, but at least now I don’t want it to ruin a damn good impression that the new VULCANO release "Drowning In Blood" has made on me. It sounds fucking massive but also authentic and raw, all instruments are in your face and powerful vocals spit out atrocious blasphemies with venomous aggression. This is quite different from modern productions in that you can feel dangerous energy ripping away from the speakers. It is not polished, but a rough, massively sounding beast! When tracks like ‘Devil’s Forces’, ‘Total Desolation’, the immensely catchy ‘Zodiac Attack’ or the rabidly fast and off-the-wall ‘Come To The Carnage’ were blasting away in my car, I was instantly brought back to the times when going nuts and headbanging to old SODOM, first two SEPULTURA albums, SLAYER or POSSESSED. VULCANO have that special energy on this album which every headbanging maniac will recognize, no bullshit triggers, pretty melodies or straightforward arrangements. "Drowning In Blood" feels like an insane, schizo demon and yeah, he fuckin’ wants to drown you in your blood! It also shows that a 14 year break between splitting up in the 90s and reforming 14 years later was very uselful for the songwriting skills as VULCANO manage to variate between the tempos effortlessly, pulling out fast catchy Speed / Thrash riffs, biting solos, bowel moving mid-passages and even odd NWOBHM lick or two. To top it all you have venomous, raspy vocals that fit this ungodly racket adding up to the whole vulcanc Metal experience! I must say, though, this might be not for everyone, if you like tight and perfect playing, go look somewhere else, this is for loose bastards! www.vulcanometal.com, www.myspace.com/vulcanobrazil, www.facebook.com/vulcanometal