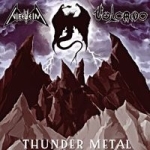 On this time and age, are split recordings really a necessity or just another tool for the Metal masses to know more than one band in a recording? Hell knows…I mean, it is the dreaded internet era… you just create a myspace thing and then everyone can know of you. Or, on the other hand, there are many compilations where you can get a handful of bands to know them. But splits are rare, although not dead nowadays. It is a way to know about two bands (sometimes even up to four) and to listen to more than one song. You see, sometimes one song it is just not enough to create an overall view of what a band does really sounds like. So, here we have a split that has been released back in 2006. It was available on limited 7" pic disc, normal 7" black vinyl and now, in unholy CD format, with a bonus song. The bands, I suppose need no introduction, but oh well, I am going to do so, thinking in maybe a couple of Voices reader that were probably in jail (without contact to the outside world) or catatonic state for the last few years… this starts with the Swedes of NIFELHEIM which are the nowadays master of Black / Thrash attack, and a mighty fine one if you want. Sawing them live last year confirmed they are on for greater things, well, as great as their unholy style of Black Metal can permit. Their participation in this split, comes in the form of two songs, one of them can be found in their latest offering "Envoy Of Lucifer" although the recording found here is from a different session and sounds a bit rawer. NIFELHEIM brings forth the primordial essence of bands like BATHORY, MERCILESS and SARCOFAGO with a very distinct touch of IRON MAIDEN. It must be known by now that the evil twins, founders of the band, are the probably the world’s number one IRON MAIDEN fans, so it was inevitable to find some touches in their music. Still, the bestiality is there and is not to be gone ever. The bonus song for the CD version comes in actually a cover song of DAMNATION (the band of their nowadays drummer) where they have the late Jon Nodveit from DISSECTION playing guitars. Although there is a noticeable difference being it the studio sessions and the way the song is performed, the style is quite similar, but to be brutally honest I just feel like this was done in a rushed way, and that maybe a new real NIFELHEIM song could have been added. Oh, well. Now we also have VULCANO as a complement of this mighty fine CD. Oh, yeah, actually NIFELHEIM covered VULCANO in another release (I think it was one of the single series "Headbangers Against Disco" 7" EP) so, in fact, the real highlight of this split must be the old Brazilian horde. Also there are 2 song presented here, done in their style that has been intact since their very beginning, but also showing the mastery that comes with age. Their style ranges in that of early SLAYER with some touches of VENOM but with a very characteristic sound that only South American bands can do… macabre Metal of Death. Am I the only one that finds a good similarity between VULCANO and MORTUARY DRAPE? Both Latins, although one from Europe the other from South America, both evil… and yes, both with long time in the Metal scene. To be honest, and to be fair, this re-issue on CD should also have a bonus song from VULCANO. Although both bands are excellent, in my ears VULCANO comes out as the best one, and also has a better vocalist. ‘Suffered Souls’ have some mighty riffing that EXODUS would be proud of doing at least something near to this not compared to the crap they release these days… So, in the end, if you were not able to get a hold of the vinyl versions, the CD is still a good one. I demand to have another VULCANO song… oh, well, I Hate Records will be re-releasing some of VULCANO’s albums (the last one "The Black Book" is a must!) and also Regain will be re-issuing some of the early NIFELHEIM albums so keep an eye on those. This is a collector’s item, but also worthy in any collection of a self respected fan of extreme Metal. www.ihate.se