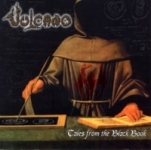 VULCANO
Tales From The Black Book
(I Hate Records)
42:37min

When one thinks of influential Metal from Brazil, the first band that pops into mind is SEPULTURA and unless you’re a fan of Brazilian / South American Metal, one would usually look no further. Seldom is a name like VULCANO’s ever mentioned except by those that know of their history and significance well. Little is it known that VULCANO were actually the first South American band playing extreme Metal… or possibly Metal for that matter. And even though at one point they were labelmates with the aforementioned SEPULTURA, they didn’t possess the same appeal that would later attract bigger labels as the latter band eventually moved on to bigger things and eventually become an iconic name in Metal and the most popular band (not just Metal, SEPULTURA’s popularity was unrivaled by any other band of any other genre of music) ever to rise out of the continent. Nevertheless, their 1986 debut "Bloody Vengeance" managed to still make an impact on the extreme Metal underground in their home country and is even considered to be one of the first extreme Metal albums released alongside opuses like "Morbid Visions" and "Seven Churches"… perhaps not in the same league of popularity or even influence, but still managed to stand on its own. It’s fair to say that "Bloody Vengeance" was / is a hidden gem in the whole spectrum of extreme Metal back in those days as people would’ve been more inclined to first check out the aforementioned releases along with other, better known titles / bands in the genre. It’s with regret to say that this was their only noteworthy album from their early period. After the release of three more, less captivating releases the band went on a 14 year hiatus until reforming and releasing their most recent recording "Tales From The Black Book" in 2004. It’s safe to say that the 14 year break gave the band’s songwriting abilities the much needed rest required to recharge its batteries… for they have returned with great force and reckoning on this album. The music here sounds like a heavier, faster, more aggressive SODOM with a generous dose of NWOBHM / Speed Metal (to say the band was listening to a lot of MOTÖRHEAD during the recording of this album would be an understatement). The result is some awesome Black / Thrash / Speed Metal reminiscent of contemporary act TOXIC HOLOCAUST who also successfully employs this particular genre hybrid. The only main flaw I found with this record is that the songs do tend to get a bit repetitive in formula halfway throughout. It does somewhat fall into the cliché of bands attempting to recapture the sound of their early work with comeback releases, but that isn’t really too bad of a thing in this case… the style is executed well, the songs (although lacking in variation and originality) are very enjoyable and you will most definitely find yourself headbanging to many of them. Overall, it’s a good return from a band that’s been out of the loop for a while. If you haven’t heard anything by them, you can check out some song samples here: www.myspace.com/vulcanobrazil