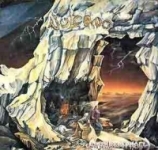 The second album by one of Brazilian’s earliest extreme Metal bands besides SEXTHRASH, SARCOFAGO, HOLOCAUSTO etc. is VULCANO, who released their debut “Bloody Vengeance” in 1986, only unleashed upon black gold and in times of Ebay I bet it is pretty expensive. Swedish up and coming label I Hate Records decided to release this unpolished piece of utterly violent Thrash Metal for the first time on CD and as a bonus included the band’s 1983 “Devil On My Roof” demo, which is actually of almost ridiculously low quality… and I don’t mean the sound. Fortunately the eleven songs of VULCANO’s 1987 effort “Anthropophagy” are way better, despite remastering you still hear the vinyl whisper and the contempt, furiosity and enthusiasm making so many of the early South American hordes so intense and aggressive is present on each tune! If you need a crisp and clear production and expect technically perfect musicianship when it comes down to 80s Thrash, this might be a bit too harsh for you, but if you associate Thrash with an uncompromising attitude, speed and sheer aggression, you might dig this! Though the album was remastered it is certainly not a caress for your ear, but Brazilian bands like the aforementioned ones and VULCANO are no exception, were essential for what we call Black / Thrash today and the emotions, in particular the rage, with which albums like “Anthropophagy”, “Campo De Exterminio” or “Sexual Carnage” were recorded is absolutely timeless and appealling. The layout of the CD is once again exemplary with a good load of old photos, lyrics to all songs and the original front and back cover of the LP. Die hard fans of old Brazilian Thrash who had not a chance to get the LP yet should get this instantly! All others should at least try this little Metal history-lesson… www.ihaterecords.cjb.net