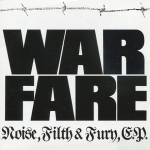 This EP, comprised of 3 tracks, showcases Metal / Punk pioneers WARFARE at their most punked up and raw sounding. WARFARE took the unbridled aggression and attitude of Punk and mixed it up with a sharp metallic edge and the result is explosive. The harsh snarling vocals of Evo definitely have more of a Punk sound to them and he spits out the venomous vitriolic vocals with power as well as handling drum duties where his percussive onslaught is equally as powerful and potent. Songs like ‘Burn The Kings Road’ and ‘New Age Of Total Warfare’ are bona fide punked up NWOBHM classics and full of hammering hook filled riffs and raucous raging vocal lines that come out of the speakers at you, grab you by the throat, give it a good hard shake and before you know it the aural assault has been and gone. In an age of NWOBHM bands going more commercial WARFARE were going in the opposite direction, defiantly raising a middle finger and blazing a MOTÖRcharged musical trail of their own and they also helped to pioneer a crossover of Metal and Punk that has influenced countless bands since and played a big part in creating an entire subgenre in itself Metal / Punk and true Metal anarchy was born… Noisey, filthy NWOBHM and punked up fury which should appeal to fans of VENOM, MOTÖRHEAD, early TANK and such bands. www.facebook.com/profile.php?id=100010703193337, www.skolrecords.com