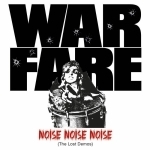 Back in the glory days of the NWOBHM, the Metal scene was loosely connected to the Punk scene in the UK. Thus people like Algy Ward of TANK fame or a certain Paul Evans played in Punk bands before they started something in the Metal scene. That certain Paul Evans, far better known under his nickname Evo, played drums in bands like ANGELIC UPSTARTS, MAJOR ACCIDENT or THE BLOOD before he started a band pretty well known and also quite infamous for mixing up Punk and Metal in the late days of the NWOBHM. That band was WARFARE and they released two cool albums (“Pure Filth” and “Metal Anarchy”) and some chaotic EPs around 1984 / 85 in the classic line-up that featured Evo on drums and vocals, Gunner on guitar and Falken on bass. With Falken’s demission, WARFARE first mutated into a pretty normal Speed Metal band and something even worse later. To keep the memory of WARFARE alive, High Roller now released three albums with old demo recordings of the band. Up to a certain point, I don’t know what really is the purpose of these releases, as most of the songs are released on the official records in better versions. But on the other hand, some of the recordings are pretty interesting as well. And most of the WARFARE stuff is out of print for years now. As far as this compilation “Noise, Noise, Noise (The Lost Demos)” is concerned, we have a kind of journey through the history of WARFARE here. The first five songs ‘New Age Of Total Warfare’, ‘Burn Down The Kings Road’, ‘Rabid Metal’, ‘Break Out’ and ‘Limit Crescendo’ are classics from the legendary first line-up of the band, not too far from the album versions. It’s just ‘Limit Crescendo’ that comes along damn chaotic here, with that extra grin in the face. The version of ‘Two Tribes’, a FRANKIE GOES TO HOLLYWOOD Pop chart buster of those days, on this recording is a real burner. Declared as an “In Dub Demo Version”, this version is much cooler than the one on the 12” of the same title, less chaotic, closer to the original without having a little bit of a Pop vibe. With ‘Alternative Hardcore’, we find a sick Punkish tune, that remained unreleased until now. The early version of ‘Extreme Finance’ rips a little more than the album version. But after this, things are getting worse. ‘Order Of The Dragons’ is a boring longer, instrumental version of a song from the "Conflict Of Hatred" album. With ‘Fatal Vision’ we find the last nice song on the album. ‘Phantom Of The Opera’ with its cheap keyboards is nothing less than a wannabe SISTERS OF MERCY tune, but really shitty, and ‘Prince Of Darkness’ is even worse! With the final ‘Death Of A Circus Clown (Chapter One)’ we have an unreleased abysmal song, that is also un-Metal and uninteresting. In my opinion, only three and a half really interesting songs and versions are not really value for money. But if you’re a real WARFARE die hard, “Noise, Noise, Noise (The Lost Demos)” should be real fun. And those who haven’t heard the band might check ’em out as well. Visit: www.hrrecords.de