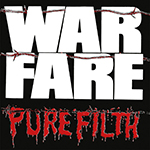 Some bands never get the accolade that they deserverved or the accolade that was hidden in the cards. Either by bad timing, bad record labels, bad decisions, destiny or a good mix of it all. One of those bands is WARFARE, even though they were about to break into the NWOBHM scene in the mid 80s, signed to Neat Records for a good deal of albums, and the apparently needed support, things faded nice and quietly. Even though the band released a good deal of classic albums, WARFARE just got stuck under the wheel, while other bands took the lead and fame. This is the band’s first full length album, released back in 1984 by Neat Records, here re-released by Dissonance Productions, a Plastic Head offspring, specializing in getting old dusty kick ass albums back onto the streets. This re-release is spiced up with WARFARE’s two ’84 EPs "Two Tribes" and "Noise, Filth And Fury" as a great bonus. The band is delivering a dirty combo of Speed Metal, Heavy Metal and a dirty rocking Punk feel. A good mix of aggression, hooking pieces and fierce vocals, backed by simple and very effective Boogie-Rock rhythm patters, it is quite hard not to be caught by the energy of the music! Mainmain Paul "Evo" Evans has always had a great talent for writing catchy, yet raw tunes, stuffed with energy and emotion. "Pure Filth" is 9 tracks of pure intensity (I don’t really know what to think of the last track ‘Rose Petals Fall From Her Face’), good riffing, hooking rhythms and an unparalled rawness, compared to the likes back then, and this is considered to be one of the band’s weakest albums (huh??? – Frank), which most likely is due to the followers being more pure NWOBHM, compared to this Punk-infested bastard! If NWOBHM says you anything, this newly released stack of albums from WARFARE is something you gotta check out, if the albums aren’t already on the shelves, even though I reckon the albums are still worth their weight due to the bonus material. I for sure enjoy the noise! Beat that poser down right here: www.facebook.com/profile.php?id=100010703193337, www.dissonanceproductions.co.uk