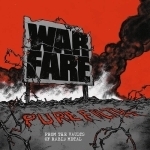 Here we have another album from High Roller Records that honours the old Metal Punk legend WARFARE and makes their demo recordings available to the public. If you’re a little familiar with the band, you’ll easily find out that “Pure Filth: From The Vaults Of Rabid Metal” refers to the first WARFARE album “Pure Filth”, originally released in 1984 on Neat Records. All the nine songs here can be found on that album, some of them aren’t on all version of “Pure Filth” anyway. The recordings sound surprisingly good, either the original tapes were that good or they were restored very carefully. So, as far as the quality is concerned, these demo recordings are as enjoyable as the original “Pure Filth” album. Most of the songs aren’t too different from the album versions here, but this is pretty much okay, since “Pure Filth” is out of print for a quarter of a century now. So this is a nice chance to get the songs as long as there is no official re-release. The introduction ‘Warning’ comes along very different here, the same goes for the chaotic instrumental interlude ‘Collision’. Classic songs like ‘Total Armageddon’, ‘Burn Down The Kings Road’, ‘Rabid Metal’ or ‘Breakout’ are as much fun as ever, and ‘Dance Of The Dead’ is not only one of my favourite WARFARE songs, it is even a little better here. Either worthwhile are the last two songs ‘Limit Crescendo’, that has an extra intro, and ‘This Machine Kills’, that was not featured on the Neat album back then, but only on the extra 7” of the first pressing and the more rare Canadian and Dutch pressings. If you haven’t heard the classic real Metal Punk chaos of WARFARE yet, this album is your chance to catch up on them. Check: www.hrrecords.de