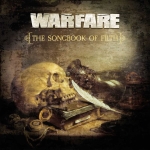 80s pioneers of Metal Punk WARFARE from North East England have enjoyed something of a resurgence in interest from extreme music fans over the past 13 years or so, who both embrace Thrash / Speed Metal and 80s HC, Crossover and Punk. And this very nicely packaged compilation of material, that mostly stems from the band’s peak 80s years, but also features some new recordings that mainman Evo has done with his old bandmate Fred Purser (also ex – TYGERS OF PAN TANG), Tom Angelripper from SODOM and ex – MOTÖRHEAD guitar legend Fast Eddie Clarke among others and would definitely be recommended to any WARFARE fan and fans of bands who crossover Punk and Thrash Metal. This release is a 3 disc affair with disc 1 featuring some WARFARE classics such as ‘Metal Anarchy’ and ‘Burn Down The Kings Road’ as well as some new material such as ‘Death By A Thousand Cuts’, which sees Evo’s trademark snarling rasp in fine form and sounding as pissed off and powerful as ever. Disc 2 has a great varied mix of older studio recordings and live recordings and sees VENOM frontman Cronos making an appearance on a demo version of the song ‘Atomic Slut’, which would later be recorded for the “Mayhem Fuckin’ Mayhem” album released in 1986. There is also guest appearances by Algy Ward from TANK / THE DAMNED on a couple songs on this disc namely ‘Baron Frankenstein’ and ‘Velvet Rhapsody’ both from the “Hammer Horror” era of WARFARE. Disc 2 also sees the inclusion of songs by main man Evo’s old bands ANGELIC UPSTARTS, THE BLOOD and MAJOR ACCIDENTS, all well respected names in the Punk scene, which Evo of course plays drums on. Disc 3 also includes some old WARFARE classics such as ‘Noise, Filth And Fury’ and ‘Military Shadow’, the latter song was produced by Lemmy from MOTÖRHEAD, who produced the 1985 WARFARE album “Metal Anarchy” which this track appears on. “The Songbook Of Filth” is an excellent and must have compilation of live versions of WARFARE classics, radio sessions, new songs, outtakes and rehearsals, with the exclusive inclusion of some rare tracks, all remastered for a great modern day listening experience, but keeping the dirty, raw vibe that WARFARE are mostly known for. The booklet and digipak is very well put together, with a little written piece by drummer / vocalist Evo before the lyrics of each song and there’s photos of all the various special guests on the album in the digipak, as well as old WARFARE photos. An ESSENTIAL purchase for any die hard WARFARE fan, you will not be disappointed by the amount of personal passion that has been poured into this compilation. Almost two hours of noise, filth and fury in the unique WARFARE way. For more information please visit www.facebook.com/profile.php?id=100010703193337, label contact: www.facebook.com/hearnoevilrecordingsltd