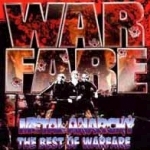 UK’s WARFARE started out in the early 80s with a classic three piece line-up, consisting of drummer / vocalist Evo (a former member of ANGELIC UPSTARTS and MAJOR ACCIDENT), guitarist Gunner and bassist Falken. Musically the band combined the best of early VENOM with some TANK and MOTÖRHEAD elements and spiced it all with a rather punky edge. The funny thing is that members of exactly these three bands were involved in WARFARE’s early releases in one way or another. Their 1984 debut album ("Pure Filth") was produced by TANK’s mainman Algy Ward, the follow-up ("Metal Anarchy") by Lemmy from MOTÖRHEAD and album number three ("Mayhem Fuckin’ Mayhem") by VENOM’s Cronos. Algy as well as members of VENOM also guested on the "Pure Filth" track ‘Rose Petals Fall From Her Face’ (which is unfortunately missing on this compilation), MOTÖRHEAD’s Wurzel contributed guitarwork to the "Metal Anarchy" album and VENOM’s Mantas to "A Conflict Of Hatred". So, those guys either had a pretty big influence on WARFARE or Evo and his lads simply got the opportunity to work with like-minded, yet more established people at the time. A whole bunch of albums and EPs have been released throughout the years, so that this "Best Of" compilation isn’t really able to do justice to their entire work, with the album’s title being a bit misleading in that repect. Instead of their "best" tunes (a rather subjective opinion anyway), you’ll get a collection of material from their classic Neat Records debut single "Noise, Filth & Fury" as well as the albums "Pure Filth" (minus the aforementioned ‘Rose Petals Fall From Her Face’), "Metal Anarchy" (minus the track ‘Commando’), two songs off "Mayhem, Fuckin’ Mayhem" and eight songs from "Conflict Of Hatred" plus the ROBERT PALMER cover ‘Addicted To Love’ (which originally only came out as a single)… 32 tracks in total. Too bad that their very cool and devastating cover of the FRANKIE GOES TO HOLLYWOOD 80s smash hit ‘Two Tribes’ and the several rather hard to find EP B-sides, such as ‘Hell’, ‘Rape’, ‘Burnin’ Up’ or Destroy’ weren’t included here as well (only ‘Blown To Bits’ from the "Two Tribes" EP made it onto this double CD set). But all in all, this is still a very cool overview about the band’s earlier stuff, nicely packaged with lots of pictures, magazine articles and stuff.