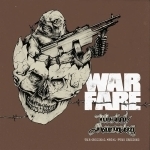 High Roller recently put out some yet unreleased (not that big of a fan of the band to be 100% sure) WARFARE material including lost demos as well as some pre-production recordings of “Pure Filth” as well as “Metal Anarchy”. As you might already have noticed this review deals with the release that features the pre – “Metal Anarchy” recordings featuring eight tracks as followed: ‘Electric Mayhem’, ‘Wrecked Society’, ‘Warfare’, ‘Metal Anarchy’, ‘Psycho Express’, ‘Living For The Last Days’ ‘Military Shadow’ as well as ‘Disgrace’. All these songs are of course known for being on WARFARE’s classic “Metal Anarchy” release but appear on “…The Original Metal-Punk Sessions” in an even rawer and faster style than on the full length. Most of you readers will probably know what one gets when spinning a WARFARE record but to all of you who are still unfamiliar with what these British bastards were all about think of DISCHARGE and add a bit more Metal to it or take TANK and add some more Punk to it – et voila this high explosive Molotov cocktail labeled WARFARE emerges. Die hard fans of the band will definitely need this release but if you don’t consider yourself as such and already own a copy of “Metal Anarchy” this is probably nothing to be considered a must have. Interested warheads can get their information here: www.hrrecords.de