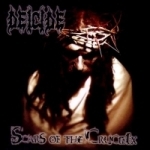 This is a re-release of DEICIDE’s "Scars Of The Crucifix" that originally saw the light of day in 2004. The CD comes in an additional slip case and also features a bonus DVD that offers a previously unreleased 12 track live show (40:37min) as well as the "Behind The Scars" documentary (35:30min) that was already featured on the "When London Burns" DVD from 2005. If I’d checked this release back then I could hop right away to the DVD. But I hadn’t, ’cause for various reasons (one of them is LUCIFERION), I lost interest in DEICIDE after "Legion" so this one is fresh to my ears. Unprejudicity rules so here we go! First contact with the opening song ‘Scars Of The Crucifix’ gave me the impression that this was a Thrash Metal record. Especially productionwise. But as soon as the first blastbeat appears all doubt was blown away by the blind and razorsharp aggression this quartet is known for. No matter what box you put them in, this album shreds! Hyperaggression is packed in meldodies that are at times as catchy (or simple) as a childrensong. Just listen to the chorus in ‘Mad At God’! No matter how hard this band tries to sell themselves – the music does the talking and if you’re into brutality only, this is cool shit! Top notch musicianship combined with effective songwriting and mindblowing intensity! Glen’s insane vocals actually ruined it and that’s a shame because musically there’s not much wrong. In the end it’s just too much for me – (or too less?) – not to mention the lyrics! I rather dust off "World Ov Worms" (but that’s just to give you a rough hint musicwise). Let’s see if DEICIDE can pull this of live on stage – on to the DVD! It’s recorded on December 22, 2003 in Nottingham (UK) and I was pleased to see that they can! Didn’t expect that this at all and I must admit, it gave me an idea why they deserve their status. The live set is shot from various directions, with a great performance, good sound-quality and a setlist full of classics (total playing time: 76:07min)!! If you didn’t have this one already and dig these sickos, this edition is a worthy purchase. More info about this album by the U2 of Death Metal: www.earache.com 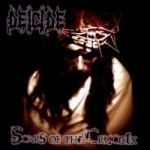 Yeah, I know some people will laugh at me for still enjoying DEICIDE that much although I’m not aged 15 anymore, but curse you all, DEICIDE still deliver finest straight and brutal Death Metal with blasphemous lyrics, that are so overdone, that they are just great! Unfortunately their last two albums were not that satisfying – “Insineratehymn” was a bit too groovy and “In Torment In Hell” sounded except two or three songs relatively uninspired. I thought DEICIDE were slowly heading towards their end, but now they managed to get out of their long-time contract with Roadrunner Records and seem to have found their true energy and drive again. “Scars Of The Crucifix” is undoubtedly the best DEICIDE album in years, short, to-the-point, straight and brutal as hell!!! Glen Benton, who recently showed on the VITAL REMAINS masterpiece “Dechristianize” that he still has the power to deliver an intense vocal perfomance, continues this tradition on “Scars…” as well. The possessed growl / scream mix one either loves or hates about DEICIDE is back in full force and really wakes memories of 92’s “Legion” or the infernal debut. Songs like ‘Conquered By Sodom’, ‘Fuck Your God’ or ‘From Darkness Come’ could have been on DEICIDE’s early releases whereas most of the other songs make me think of “Once Upon The Cross” or “Serpents Of The Light”. The leads are infernal, the drums absolutely merciless, the band is tight as ever, the production is just great and even when the fan speaks in these words it should be obvious for everybody that DEICIDE have released a damn strong album. Check out the MP3 on the Earache website and be aware of the fact that it is the slowest song on the album. Watch out for the special edition of the album containing a DVD exposing DEICIDE as the wicked, posing Americans they are, just ridiculous… www.earache.com