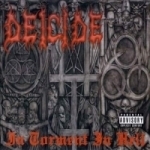 Well by some chance miracle (or course) the local Metal store here got this in way early. So I lapped it up of course, hehe. I’m a DEICIDE fan through and through so I know them well and what to expect and want. What I didn’t want was “Insineratehymn” from last year, it stunk the place up. That album was too slow and not creative in any respects, solos, drums, vocals and lyrics. Still I do listen to it since im a hardcore fan. Fact: Glen Benton does not like God. This album is 8 tracks (a la “Legion”) clockin in at 31 mins. What they did was cut all the fat out from the past release and put the goods into a tightly packed 8 track album. This album kicks off with the best intro they’ve used, damn it Bob Larson the schlock tele-Evangelist from early 90s is on it!! That instantly took me back to the early 90s when him and Benton were at each others throats, Benton would appear on his show regularly and Larson would always talk shit about him. Right away you know this album is killer, its a lot faster and more technical than the past 3 efforts. The tracks ‘Child Of God’ and ‘Vengeance Will Be Mine’ instantly reminded me of “Legion”. The rest is a lot like “Once Upon The Cross”, simple yet effective riffs, blasting drums and frenzied well placed solos. The lyrics seem a bit more honest and thoughtful, yet Benton has become really aggressive and defensive these days. This album really does remind me of the early 90s when DEICIDE was utterly evil. Its nice to have them come back in a big way, this shows they are not out of ideas. This is a definite pick up for all the Death Metal freaks out there. Other songs noteworthy are: ‘Worry In The House Of Thieves’ and ‘Lurking Among Us’.