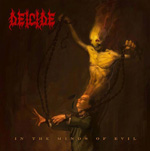 DEICIDE
In The Minds Of Evil
(Century Media Records)
36:48min

Mr. Benton and his warriors in DEICIDE are back with the band’s 11th studio album, titled "In The Minds Of Evil". Glen Benton is known as a controversial person and he’s also pretty uncompromising about the way how he wants to run DEICIDE. If he has a trouble with something, he gets rid of it quickly too if it stops DEICIDE in any way to spread the band’s satanic plague across the Christian’s holy lands. Guitarist Ralph Santolla, who played on DEICIDE’s previous 3 albums, is out of the line-up, and his place has been taken by Kevin Quirion in DEICIDE. Kevin is an old friend with the DEICIDE guys, and also plays in a band called ORDER OF ENNEAD together drummer Steve Asheim. But that’s all about a side track talk now. "In The Minds Of Evil" brings DEICIDE a few steps back a bit more straightforward musical direction, i.e. a more riff orientated direction – having less melodic stuff being incorporated into these new DEICIDE cuts, in the good old school DEICIDE spirit. Both guitarist Jack Owen and Kevin Quirion conjure up such fierce yet catchy wall of riffs on this new DEICIDE opus that some other Death Metal guitarists would obviously kill for, Steve’s somewhat phenomenal drum work doesn’t leave much room for any complaints and Glen’s meaty and heavy bass sound is intact throughout the entire album – not to talk Glen’s distinctive, very trademark-ish grunts that overall are still some of the most tasteful and convincing vocals used in Death Metal. Everything on "In The Minds Of Evil" sounds like the guys have been driven by some new old winds creative wise. There’s really nothing half-assed at all on this record; every detail is carefully thought out, and has been paid attention to. At times one can be reminded of something off DEICIDE’s most ground-breaking work to date "Legion", while at some other times it could be albums like "Once Upon The Cross" and "Serpents Of The Light" for others that they are reminded of, on "In The Minds Of Evil". The bottom line however is, "In The Minds Of Evil" hits true jackpot this time and can easily be considered one of the best DEICIDE records to this very day. It’s right there next to their self-titled debut or "Legion" or "Once Upon The Cross" in my humble opinion. Look how a wide diabolic grin Satan has on his face again. www.facebook.com/pages/deicide/148130331915126, label: www.centurymedia.com