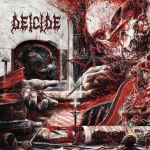 After a five year hiatus the Tampa based legends DEICIDE are back with a new line-up and their twelfth full length album entitled “Overtures Of Blasphemy”, the third one on Century Media Records. To be honest, I didn’t really have great expectations about this new title, because I have to admit that the majority of their discography since 1997 has disappointed me. Personally, I consider their 1990 – 1995 period as their best one, due to the release of a terrific triptych that made his indelible mark on the history of Death Metal. “Deicide”, “Legion” and “Once Upon The Cross” had everything in those years and, yes, they still rule: originality, musicianship and brutality, what you should expect from a proper Death Metal album. Then DEICIDE just got a bit lazy, started arguing among themselves with Glen Benton and Steve Asheim that kicked out the Hoffman brothers and kept on playing and releasing new albums, recruiting some very talented guitarists such as Jack Owen and the late Ralph Santolla (R.I.P.). From this second phase I save just three albums: “Serpents Of The Light” and “When Satan Lives” (both with the Hoffmans) and “The Stench Of Redemption”. I’ve always seen the rest of their discography as a mediocre, blatant and uninspired rip-off of their early works; you know, like those bands that repeat the same formula over and over again. “Overtures Of Blasphemy” follows this trails, but has the merit of standing out among their last efforts, just as “Serpents Of The Light” or “The Stench Of Redemption”. Here we have 12 tracks for almost 40 minutes of brutal and evil Floridian Death Metal: technical, but not overly technical, well played, well produced and without compromises. A lot of credit goes to Steve Asheim, that proves himself as one of the best drummer in Death Metal history, as well as a great songwriter, since most of the guitar riffs are written by him. After almost 30 years he is still a double bass champion and a very technical drummer: dynamic rollings, killer blast beats, mid tempos etc. This guy knows very well how to play drums (I had the chance to see them live and his beats sound exactly like on the albums). The riffs are catchy, sometimes thrashy, aggressive and fit perfectly with the voice. There are many precise solos and some melodies here and there, the latter sometimes enroach upon a pretty boring form of melodic Death Metal. But fortunately these parts are partly limited, so the overall brutality remains intact. A deserved round of applause for the guitarists (Kevin Quirion and Mark English). There are also very good news about Glen Benton’s performance with his typical alternation of low-end deep growlings and high-pitched screamings. Then we have their conventional ultra-blasphemous lyrics, a powerful production and a blood-drenched cover artwork enlightened by the Trifixion symbol (a legacy of their past). In conclusion, this is a honest comeback of a legendary band, not as memorable as their early triptych, but it’s for sure a brutal and solid release. This is DEICIDE: take it or leave it! www.facebook.com/officialdeicide, www.centurymedia.com