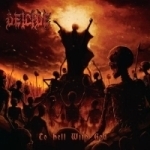 "Legion" might be my favourite Death Metal record ever, but aside from that one and the debut, the rest of DEICIDE’s discography really doesn’t hold my interest. The more recent efforts by the band have increased use of blastbeats, which is a good thing in my opinion, but somehow the music sounded like an aging band running out of steam. However, anyone that creates one masterpiece can never be counted out for making more great music. Witness "To Hell With God", an addictive nugget of killer fucking Death Metal. Immediately what jumps from the speakers is a pummelling and yet solid-as-hell production. The combination of well-done drum triggering (to me the record would have benefited a lot more from a more natural drum sound – Frank) and palm muted tremolo picking make for an insanely tight sound picture: clean, but not clinical. You can even pick out Glen’s magnificent, clanging bass-mayhem. Great songs abound: ‘Save Your’ is a foaming-at-the-mouth blaster, ‘Angel Of Hell’ has parts that take me back to ‘Sacrificial Suicide’, and what sounds like a lost ‘Chemical Warfare’ riff even emerges at around :44 in ‘Servant Of The Enemy’. Incidentally, Ralph Santolla’s soloing (to me this kind of Malmsteen like soloing is nothing but totally annoying, especially on a DEICIDE record – Frank), which I have always regarded as too "flowery" for DEICIDE, comes across as more unhinged this time around – making DEICIDE more like themselves and less like a VITAL REMAINS doppelganger. "To Hell With God", with its well-crafted songs and juicy production has made it a record I have returned to again and again. Recommended! www.myspace.com/theofficialdeicidemyspacepage, www.centurymedia.com