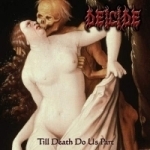 DEICIDE
Till Death Do Us Part
(Earache Records)
42:12min

I had already read several reviews of this album before I even heard it. Of course, some of the response has been critical and dismissive. But, really, what does one expect from a DEICIDE album released in 2008? Clearly, DEICIDE have become (along with nearly every band that has managed to maintain a career spanning two decades), to some degree, a parody of their former selves. To see that this is true, one need only examine the “Glen Benton for President” patch that accompanies the CD version of this album (and, no, I will not be voting for Mr. Benton this November). Nonetheless, this album is just about what I expected and for those purposes it’s not all that bad. It is my belief that there is something of merit on every DEICIDE release and this is no exception. However, there is little chance that I will ever select this album rather than the self-titled album or “Legion” to listen to when I am in the mood for DEICIDE. Much has been made of the fact that, apparently, in addition to standard anti-religious themes, lyrically this album delves into interpersonal relationship subject matter. Personally, I could not care less about Benton’s marriage or anything else about his personal life. Lyrical content has never been the allure of DEICIDE. Rather, DEICIDE’s charm lies in the immense thickness of their sound and the draw of the devastatingly rhythmic and precise delivery of the songs. These elements are still present on “Till Death Do Us Part”, but seem tired and contrived at times. Indeed, few of the songs have been constructed so as to maintain one’s interest all the way through. With most of the songs lacking such necessary hooks, I often found myself losing interest about halfway through each track. Perhaps the most difficult piece of the modern DEICIDE formula to accept is Benton’s vocal delivery. Clearly, Benton has always constructed his lyrics and vocal delivery in a rhythmic manner and such that it mimics the underlying riffs. These days, however, the vocal delivery sounds so half-hearted and the vocal patterns lack any sense of subtlety or intricacy. The solos, too, have a similar lackluster feel to them despite the fact that DEICIDE enlisted Ralph Santolla to help out with leads on the album. In their finest hours, DEICIDE have created some of the most compelling and catchy Death Metal ever recorded. These days, they are, at best, good background music while you’re at work or otherwise distracted (this album actually is really good for this purpose). Therefore, while this is a decent album, it fails to produce much that is memorable after you have turned it off. And yet, notwithstanding all of these criticisms, this is by no means a bad album, and, especially after two or three listens, it is actually rather satisfying on a certain level. Little more needs to be said about “Till Death Do Us Part.” Like any high profile record released these days, magazines, zines, and internet forums will go back and forth about its merits or lack thereof. Ultimately, while far short of being classic DEICIDE material, I can honestly say that, after listening to this record, I believe DEICIDE have retained more of the integrity of their sound than most currently active Thrash Metal, Black Metal, or Death Metal bands who have released a comparable number of albums over a similar span of time. www.earache.com