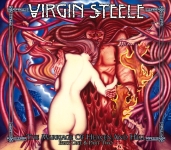 Now that’s an ultimate re-issue! Maybe these two aren’t the most rare VIRGIN STEELE albums, and both were re-issued several times already, but it’s the first time when both parts of this Epic Metal masterpiece – or two separate masterpieces, if you prefer – are released together in one package. Again, both albums were originally sounding really good, so most probably didn’t really require any special mastering – but it’s said both albums were mastered again, so alright, let it be. The cool thing about both parts of "The Marriage…" is that actually there are no bad songs here. Sure, we have some terrific and outstanding classics, like for example ‘I Will Come For You’ or ‘Blood And Gasoline’ on "Part 1", or ‘A Symphony Of Steele’ and ‘Emalaith’ on "Part 2" – but every single song could be taken out, and promote the album as the single or video clip. Both discs include bonus tracks: on the first one we find ‘Angela’s Castle’ (short instrumental song, originally recorded during the "Marriage…" sessions and now issued for the first time) and ‘The Sword Of Damocles’ – great newly recorded song, which sadly has demo sound quality. The bonus tracks on the second disc are much more interesting, as we receive live versions of ‘Life Among The Ruins’ and ‘I Wake Up Screaming’. Most people aren’t fans of all those live, interview or rehearsal bonus tracks, but these 2 sound good, and it’s a pleasure to listen to them – let’s hope it’s also a teaser that will be followed with a real live album from these US Power / Epic Metal heroes. Summary? Really cool re-issue so if you haven’t these 2 great albums in your collection yet, here’s your chance! More information: www.virgin-steele.com, www.facebook.com/pages/virgin-steele-official/343424605669868 and www.spv.de