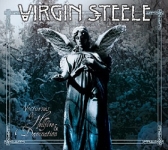 One of those bands that never dies is VIRGIN STEELE. The New York based outfit is around for nearly 35 years now, never really on top, never really dead and buried. After two pretty nice, but not too thrilling pioneering US Metal albums, VIRGIN STEELE released two highly acclaimed, yet not successful albums. The overrated “Noble Savage” and the even more overrated “Age Of Consent” became iconic for their epic tunes, yet everyone seems to forget that there were some unbearable cheesy songs on these albums as well. The best VIRGIN STEELE recorded in that era was the “Nightmare Theatre” album under the moniker EXORCIST, an occult and theatrical Speed Metal album the band denied for two decades. Well, this statement will see me excommunicated from the true Metal circle within 30 seconds, but I don’t care. Returning to VIRGIN STEELE, the band had their best times during the 1990s, when they put aside their cheesy songs and focused on their epic qualities. The very ambitious album twin pack “The Marriage Of Heaven And Hell” and the damn good “Invictus” album saw the band at the epic peak of their creativity. Since these albums, VIRGIN STEELE released some more records, but somehow those albums weren’t that convincing anymore. Especially the last album “The Black Light Bacchanalia" (2010) was so overambitious, it even was mundane. So my expectations for the brand new “Nocturnes Of Hellfire & Damnation” weren’t too high. But the first song ‘Lucifer’s Hammer’ seemed to belie me at the first impression. Pretty powerful, even energetic and a good opener for an album like this. But in the middle of the song, Mr. DeFeis’ vocals sound pretty childish to me, so high, it’s even ridiculous. Thankfully the more epic double ‘Queen Of The Dead’ and ‘Black Sun – Black Mass’ are much better in this concern, the latter surprises with a chorus that hints on the old EXCORCIST tune ‘Black Mass’. So, thirty years later, the circle is completed. Nice idea, indeed. After the a little bit doughy ‘Persephone’, VIRGIN STEELE add a pretty dark side to “Nocturnes Of Hellfire & Damnation”. ‘Devilhead’ has an atmosphere that’s even similar to Doom Metal and the all in all too long ‘Demolition Queen’ surprises with a dark Hard Rock vibe and some Blues twists. While ‘The Plague And The Fire’ is pretty typical, but not that good or even outstanding for VIRGIN STEELE, ‘We Disappear’ has a quite modern touch in the main riff that doesn’t fit the band too well. This too lengthy song opens up for an end to the album, that somehow smells of profanity. ‘Glamour’ and ‘Delirium’ are pretty irrelevant and ‘Hymns To Damnation’ is a promise not kept, because it’s not a hymn to damnation, but a piano based banality. The final ‘Fallen Angels’ is another piano song with strings attached, so it’s a quite unlucky choice to save the piano “overkill” for last, even though ‘Fallen Angels’ unfolds some old VIRGIN STEELE magic again. So, in sum we have a very patchy new VIRGIN STEELE album, better than most they had to offer within the last ten years, but still far from the old magic especially of the 1990s. For those interested, the digipak edition of “Nocturnes Of Hellfire & Damnation” features a complete bonus disc full of extra material, hence the exorbitant running time of the album. This extra disc features some strange cover stuff in the beginning, like the ‘Halloween Theme’, ‘D.O.A.’ or a very cool interpretation of ‘Black Sabbath’ (David DeFeis ain’t Ozzy, hehe!) combined with LED ZEP’s ‘The Immigrant Song’. Additionally, there are no less than nine original songs, that just didn’t fit on this album or previous albums. I can’t help the feeling that this extra disc is an experimental stage for VIRGIN STEELE to show some other sides of their work or even more to use some songs that would have ended up as b-sides in times of old. The epic ‘Riderless Horse (Save Your Breath)’ or the pretty light hearted ‘The Devil Drives’ must be some of these left-over tunes. They don’t fit into the context of the album, as well as ‘Anger Never Dies’, that has a certain NWOBHM spirit in the riffing, combined with an unusual, different epic spirit that’s even near to bands like KANSAS. On the other hand, ‘Funeral Games’ even has a very balladic feeling, despite the title. Not even average songs like ‘Haunted Wolfshine’ or the acoustic bore ‘A Greater Burning Of Innocence’ complete this extra CD with better stuff like the epic ‘West Of Sumer’ or ‘The Birth Of Beauty’ that show some of the typical trademarks of VIRGIN STEELE. Taking the bonus disc into concern as well, I still can’t help the feeling that the best times for Davis DeFeis and his sidekicks are over, even though “Nocturnes Of Hellfire & Damnation” are a step back into the right direction. Check out www.virgin-steele.com or www.facebook.com/pages/virgin-steele-official/343424605669868 for more.