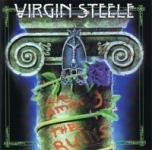 Yet a VIRGIN STEELE goodiebag to dig into. This time the ‘93 album "Life Among Ruins" has been boosted with bonus material and is back on the street, as a testosterone explosion about to happen. "Life Among The Ruins" is perhaps VIRGIN STEELE’s least appreciated album as its Blues rockin’ attitude after the rocking epic Heavy Metal albums, and just before it all really exploded with the two masterpieces "The Marriage Of Heaven And Hell" Pt. I and II and the rest of the grand epic Heavy Metal bashers in the late 90s and start 00s. It isn’t easy to be the rockin’ album in between the early beginning of epic Heavy Metal and the artistically breakthrough of the band, and due to that matter "Life Among The Ruins" has always been overlooked, which is a shame, as there is great music on the album. The Blues Rock feeling, that most of the material is oozing of, is intense and driving and very life confirming. Quite often straight on, though not throwing away the ear for symphonic compositions and grandiose emotions in the music. The virtuosity of David DeFeis and Edward Pursino is well known, though the 5 tracks from the acoustic rehearsal we get, where the two of them knocks it off in in DeFeis’ living room are amazing, the feel and intensity of a guitar and vocals, damn, they both have an extra star from here, breaking the scale. Of the bonus material, the acoustic rehearsal is the most interesting, though we are getting some interesting covertunes. ZEPPELIN reworked through ‘When The Levee Breaks Down* and my fave STONES track ‘Sympathy For The Devil’ among others. The New York mix of some of the "Life Among The Ruins" tracks is also interesting to hear, though it would have been cool if the liner notes told, why the band went with the released mix and not the New York mix. This release is a treat, as the other overloaded re-releases we have been seeing, there are some true gems for VIRGIN STEELERS on these 2 discs. It is incredible how much material the band has gathered over the years and even more incredible that we are getting the chance to hear it now, don’t miss out on that! More info at www.virgin-steele.com, www.spv.de