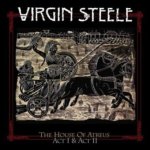 Last year I had the (not too great) honour to review the latest offering of the seemingly indestructible Epic US Metal institution VIRGIN STEELE. “Nocturnes Of Hellfire & Damnation” saw the band return to better times after the decline of their glory since the turn of the millennium. After their praised, but in my eyes overrated albums of the 1980s, VIRGIN STEELE had their best times in the 1990s, with the two ambitious “The Marriage Of Heaven & Hell” albums and “Invictus”, the finest stuff VIRGIN STEELE ever released. After that career highlight, singer David DeFeis, guitar player Ed Pursino and Frank Gilchriest tackled their next great and ambitious project. A new twin album, again, this time with a lyrical concept based on ancient Greek mythology and the musical claim to combine Epic Metal with classical music. The plan was good, the result was… overambitious! “The House Of Atreus”, released within not even a year in 1999 respectively 2000, turned out to be a giant, 165 minutes long opus, spread over no less than three discs because Act II was too long for a single disc. Since the original releases on T&T Records are meanwhile hard to get, Steamhammer, the current label of VIRGIN STEELE, put out a 3 CD edition that features the whole “The House Of Atreus” opus at once. As far as Part I is concerned, I am able to refer to a review I wrote for issue # 16 of German Metal magazine “That’s Metal”, just when the album was originally released. Back then I noted the high quality of the opener ‘Kingdom Of The Fearless (The Destruction Of Troy)’, but after that, VIRGIN STEELE were running out of steam. Some lengthy parts diminished the joy of listening, especially due to a lot of short instrumentals and spoken word interludes. Listening to “The House Of Atreus Act I” again after one and a half decades, I think that this review not only still fits the album, it is even a little too friendly, since I think the album is nothing less than boring after the first song. Too much interludes, too much keyboards and too few “real songs” that even are not that good in terms of VIRGIN STEELE. Just take ‘Great Sword Of Flame’ as an example: this song would be one of the most insignificant songs on any other 1990s album of VIRGIN STEELE, on “The House Of Atreus” it was a kind of highlight in the company of four interludes. Looking back, this album could be seen as the beginning of the band’s decline. But the once also expressed hope for a change to the better on “Act II” was (partly) fulfilled. Subtitled "Wings Of Vengeance", the start of the second act is definitely more exciting and more Metal as well. On the first disc, interludes were used more in a careful way, thus the flow is a lot more organic and dynamic. On the other hand, it’s hard to deny that the material doesn’t take a stand against the songs on the previous greater deeds of VIRGIN STEELE. But in some moments the abilities of David DeFeis and Ed Pursino to create epic anthems shines through. Especially the final three songs of the first disc can be named as good examples. ‘The Wine Of Violence’ is already a nice overture with good moments. The following ‘A Token Of My Hatred’ is a monumental song that nearly plays in the same league than ‘Noble Savage’ or ‘Veni, Vidi, Vici’. Finally ‘Summoning The Powers’ is a fine example for the more keyboard borne epics of VIRGIN STEELE. So much for the “good disc” of “The House Of Atreus, Act II". The second disc nearly shows the opposite, since besides the pretty fine balladic ‘Arms Of Mercury’ pure boredom takes command. Interlude after interlude – the great sleep is getting nearer every moment. If you want to judge it favourably, you might depict it as the calm before the storm, an overture for the grande finale. Well, the storm turns out to be not much more than a gentle breeze. ‘Resurrection Day (The Finale)’ might claim to be the final big bang, but it can not really keep the promise. Don’t get me wrong, this song is one of the better ones on the whole “The House Of Atreus” opus, but in comparison to the former work of VIRGIN STEELE, it’s nothing more than “pretty nice”. But this conclusion is somehow fitting to the whole story told on this disc, since it is promising, but fails in the execution, somehow as overambitious as the whole three CDs. To give this re-release a special bonus, it also features the songs from the “Magick Fire Music" EP, released in the year 2000, that was intended as an appetizer for “Act II”. This EP featured alternate mixes of three songs from the two albums, a re-mix of ‘ Prometheus The Fallen One’ from the second of the “Marriage…” albums along with ‘Agamemnon’s Last Hour ‘, an interlude that was left off, and a redundant acoustic version of ‘Gate Of Kings’. These recordings might be of interest for a die hard VIRGIN STEELE maniac. To me, these six songs are of absolutely no interest. Yet it is pretty ear catching that the best song of these bonus tracks is the only one that was not a part of “The House Of Atreus”… I’ll leave you now with my epilogue on VIRGIN STEELE: if you aren’t familiar with the band, check their legacy from the mid of the 1990s first to find out what they were able to play in their best years, or check out: www.facebook.com/virginsteeleofficial, www.spv.de