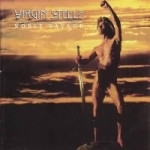 I cannot really tell since when I know this band… many, many years ago… and yes, I have heard many songs by them… and most of the time, I always felt they lack identity; neither they were a real Power Metal band, nor a Hardrock band, but they tried hard to be both. And also, I always felt they were cursed every time with production values lower than what the band needed. Thus, I lost any interest in this kind of Metal, to follow more closely the more extreme Metal sounds… then again, I always felt that this band were capable to be up there with the big names, as they had many things to do so, at least they do have great musicianship, killer guitar playing and a good vocalist. Yet, some details as the aforementioned production values, the changing music style and I might add their name were also a factor in this band to be kept just as some sort of "always pretender". This album, released back in 1985, is now resurrected with a far superior mastering, thus making it sound heavier than ever before. And that is also something that encompasses the thing I have mentioned before… they are an amazing Power Metal band, and they are a very competent Hardrock band, but when both styles are mixed in the album, something just doesn’t work. And let me tell you this: it is not that they play Power / Hardrock Metal, no. Some songs are Power Metal, and some other are Hardrock, and very few, really very few try to mix both styles (thus sounding actually more like progressive Metal than anything else). If the band decided for once to go one side or the other, I am more than sure they would be gods among mortals… but they decided to keep that balance going on thus making it hard to achieve a wider loyal fan base, and just few "die hards". I mean this is a band that without doubt inspired more popular acts like ICED EARTH, just listen to ‘We Rule The Night’… and in some areas they could probably be better than DREAM THEATER if they decided to go more progressive like in ‘Don’t Close Your Eyes’… and when they rock hard, they put on shame bands like MÖTLEY CRÜE like in ‘I’m On Fire’… yet, for this American band, the road has been hard… and probably also the reason they keep struggling on to this very same day. One thing I must appreciate is that instead of going softer, through the years they have going a bit more on the more power metallish side. Thus making a great album as the "House Of Atreus Pt. I" which is there up high in the Olympus of Metallia… now this new remastered and extended edition spanning over 2 CDs is actually a quite worthy addition if found at a decent price, as there are many killer tunes here, although again, for my tastes they should have done a more pure Power Metal album and this would be legendary. It is one of those albums where the "fast forward" function (for skipping those more hard-rockish songs) and the "backwards" function (for listening again to some facebreaker tunes) is more than welcome. www.virgin-steele.com, www.myspace.com/virginsteele