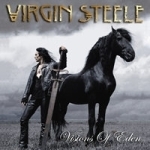 Epic Metal from the US usually isn’t as sweet as European stuff so probably that’s one of the reasons why I became a VIRGIN STEELE fanatic. As always I’m highly satisfied with the new record’s songwriting as it takes you on a journey of emotions. For my taste, David DeFeis is Metal’s Paul McCartney when it comes to creating ever lasting melodies. Quite a few people already said it’s a lot better than the previous album. My theory is that those who didn’t like “The House Of Atreus, Pt. 2” simply didn’t like all those piano interludes – why didn’t they simply program their CD players according to their taste? “The House Of Atreus 2” was the soundtrack for a Metal opera put on stage in Memmingen, Germany, a couple of years ago and so is “Visions Of Eden”. That play was called Lilith and that’s what this concept album is about: Lilith, first wife of Adam. Too independent for Adam’s – and God’s – taste she was deceived and driven into rage, hatred and madness only to be replaced by the more convenient, submissive Eve. Once again I’m thrilled and almost satisfied by a VIRGIN STEELE album. Why almost? Didn’t I say something about being a VIRGIN STEELE fanatic? Someone who traveled all across Germany and even to Sweden to see VIRGIN STEELE shows? Yes, indeed. The reason for this are two massive mistakes concerning the rather thin production: Frank “the Krakan” Gilchriest’s drums sound terribly plastic, just as if this was a drum computer (just listen to those hi-hats!). It’s still obvious for most of the recording that you’re listening to a human drummer, though. A truly amazing one, by the way. Not even NECROPHAGIST’s Muhammed Suicmez would be able to capture such drumming with a machine, I think. The next “crime” is that my all time favorite guitar player Ed Pursino’s guitars are hardly audible! No, I’m sure I’m not deaf (yet), even though VIRGIN STEELE’s live sound guy tries to change this fact every time I catch ’em live. Instead, the keyboards and the vocals are way too much in the foreground. When I first listened to “Visions Of Eden” over the headphones, I was absolutely shocked! Isn’t this supposed to be a METAL record? The beginning of ‘The Hidden God’ sounds a bit like the sound effects of a video game of the 1980s (the song itself kicks some serious arse, though)! Still, songs like ‘The Ineffable Name’, ‘Bonedust’, the thrashy ‘Childslayer’ or the title track (well, actually each and every one of the new songs) are burnt into my mind already and will raise my spirits every time they’re low. Consequently, “Visions Of Eden” is a must have for every fan of Epic Metal once again as music-wise it’s one of the best albums of the year. Unfortunately, the pleasure won’t be pure. www.virgin-steele.com. 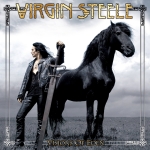 I rarely understand the decision to come up with re-mixed or even remastered versions of releases that had their time and left their mark. And even more rarely I do find it has been a worthwhile decision. In this case we have not one new version of "Visions Of Eden" but two. Disc one is called "Barbaric Re-Mix Version" and disc two "Romantic Re-Mastered Version". I took the trouble to go get my old promo CD from when I first reviewed this album about a decade ago and sure, there are slight differences in sound… the "romantic" version is generally lower, the piano keys sound a bit higher and the drums even more programmed, for instance. But in spite of the fact that the guitars on the original album did sound somewhat thin, how more "barbaric" can the other version sound? The answer is, not that much when we’re dealing with something as incredibly melodic, epic and operatic as "Visions Of Eden". It’s not at all easy for someone like me to enjoy such an orchestrated album (sometimes exaggeratedly so), mainly considering the vast offer in Happy Metal we’ve had since the nineties (of which this is NOT an example), but I do really like this record and recognize both its legitimate metallic qualities and artistic relevance. It sounds a lot like MANOWAR at its most pompous and beyond, which is helped by the obvious similarities between DeFeis’ voice and Eric Adams’, besides, of course, the similarities in style (Epic Heavy Metal) and even in themes (heroism, history, mythology), although VIRGIN STEELE’s lyrics are better written. Still, despite the relative lightness, listen-ability and musicality, it’s hard not to be in awe of the grandiosity of such a work. And also its length, delivering 11 tracks with around seven minutes each in average, summing up to a total close to one hour twenty of the history of Lilith, God and friends. It’s such a demanding work you actually feel you have to take the time to sit down and listen to it… it’s not meant for a casual listen. There is much in this album that is almost unique, and even surprising, like the fact that it is so much piano-oriented and it works. Or the vocal performance, which is in itself astounding. So perhaps the greatest merit of this re-release is the excuse to revisit DeFeis’ visions of Eden, which can be quite a travel indeed for those with the taste to enjoy such a staggering artwork. Get more info at: www.virgin-steele.com, www.facebook.com/virginsteeleofficial, www.spv.de