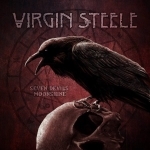 I will be perfectly honest with you: the last VIRGIN STEELE album that I personally really admired was "Invictus". And that already dates back to 1998. In the years to follow, the band’s sole founding member, David DeFeis (vocals / keyboards), still released tons of material, that he recorded basically all on his own (with little contribution from guitar player Edward Pursino). I think DeFeis is a multi-talented, highly skilled musician, blessed with an impressive voice that easily covers the whole spectrum: from aggressive roars to the highest notes and from very emotional to really dark moods. And as a composer he’s able to write beautiful piano based material pretty easily… But the problem is: all this more relaxed sounding material gets released as VIRGIN STELLE albums (rather than David DeFeis solo efforts) for quite a while now. Everything that had the band logo on it (no matter if it was a brand new album or a re-release with tons of newly written and recorded bonus material) just didn’t do the name VIRGIN STEELE justice to me anymore. DeFeis definitely lacks a real band situation these days, where other members also contribute to the songwriting and turn his ideas into real band songs. I just miss the power, the energy, the rocking elements and the epic feel of songs like ‘Burn The Sun’, ‘The Redeemer’, ‘Noble Savage’, ‘The Burning Of Rome’, ‘I Will Come For You’, ‘Blood And Gasoline’ etc. etc. Nowadays I feel reminded a lot more on a steamy pub situation, with DeFeis and his piano in the spotlight, all on his own, performing alternative versions of old VIRGIN STEELE songs mixed with unique interpretations of a bunch of cover songs… "An evening with David DeFeis" so to speak… And that is also the problem with this new, massive 5 CD boxset again, which offers approximately 6 ½ hours (!!!) of music. It is all very demanding stuff and once again (unfortunately) not suited for a high energy VIRGIN STEELE live show. Over the course of the playing time it all just gets tiring and the inflationary use of roars, screams and "Look outs" becomes annoying and repetitive pretty quickly. The first 3 discs of this boxset all basically contain very emotional songs, partly composed and performed on the piano and therefore always very classical / orchestral inspired. Then there’s others, that are mostly re-arranged and re-recorded VIRGIN STEELE songs, but they sound more like work in progress demos to me as they definitely lack heavy guitars and a drummer (sometimes you just get to hear a drum machine). And last but not least, there’s several cover songs of a pretty diverse list of artists (from Chris Isaak to WHITESNAKE, from MOTHER LOVE BONE to LED ZEPPELIN and from T-REX to ZZ TOP etc.). Disc 4 and 5 are re-releases of the "Hymns To Victory" and "The Book Of Burning" compilations from 2001 and 2002 respectively (the latter even with an additional bonus track) and therefore the most VIRGIN STEELE sounding and most impressive material of this boxset. Before I end this, let me also tell you a few words about the packaging: all 5 discs come in papersleeve covers, each one with individual cover artwork and title and there’s also a massive booklet and a sticker of the "Seven Devils Moonshine" artwork included. What I don’t like about it is the fact that the actual box is slightly bigger sized than the included discs, so that they float in it back and forth. A boxset of the same size as the discs would have been a better decision here (just like the VENOM "Assault" or "The Singles" boxes that recently got released). But that’s just nitpicking of course. So, if you are a VIRGIN STEELE / David DeFeis die hard fan, this is definitely value for money (the box is being sold for a reasonable price) and a nice addition to your collection. Everyone else should better go for the early works of the band to experience the true magic. More about VIRGIN STEELE at www.facebook.com/virginsteeleofficial, label contact: www.spv.de