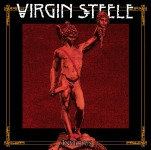 This album couldn’t have a better title – it’s of course connected with the story that is told on this concept album, but the truth is "Invictus" is one of the sacred and legendary albums of US Heavy and Power Metal, and what’s quite unusual here, it’s not an album from the ’80s, but originally released in 1998. It was out of print for some time now, so it’s good that SPV decided to put this reissue on the market. And like with all the previous VIRGIN STEELE reissues from SPV, also this one is extremely packed, and available as a double disc set in digipak. The first CD includes the mentioned "Invictus" album – if you know the original version, it won’t surprise you as the band used the same mix, it was just refreshed a little bit with new mastering. But as they say, you can’t correct perfection. So "Invictus" is exactly the same like back then in 1998: majestic, epic, and absolutely terrific. It’s cool that now, 16 years later (!), it still sounds fresh and would easily win a duel with most of current Power and Heavy Metal productions. No wonder, that many VIRGIN STEELE fans list "Invictus" as their favorite release of the band: it’s their magnum opus, and the peak of their career. While they had amazing albums both before ("Guardians Of The Flame", "Noble Savage" or both parts of "The Marriage Of Heaven And Hell") and after doing this one, it was hard to top the level of this masterpiece. The bonus disc in this reissue package is a separate thing, and so it has a separate title: "Fire Spirits". And to be honest, this disc released alone would be also worth its price, as it’s something truly special and unique, at least for the VIRGIN STEELE die hards. Divided into 3 chapters, the album includes 15 acoustic songs: the first chapter is the "live rehearsal" recording, chapter 2 was recorded live in the studio, and chapter 3 titled "Live Fireplace Rehearsal Medley" is a kind of One-Take-No-Dubs recording. It’s not the usual acoustic / unplugged release, as all the tracks – incl. ultimate and well known hymns such as ‘Victory Is Mine’, ‘Great Sword Of Flame’, ‘Emailaith’, or ‘I Will Come For You’ – were totally rearranged, and in few cases we can hear also interesting variations and medleys. "Fire Spirits" end with a brand new song titled ‘Do You Walk With God’ – an epic ballad with piano, guitar, and David’s magical voice. Well, probably people who aren’t into VIRGIN STEELE won’t be that enthusiastic about "Fire Spirits", but as mentioned: VIRGIN STEELE die hards will play it again and again. All additional information at: www.virgin-steele.com, www.facebook.com/pages/virgin-steele-official/343424605669868 and www.spv.de