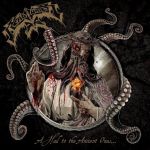 HEADHUNTER D.C.
A Hail To The Ancient Ones...
(Eternal Hatred Records)
74:55min

Opinions always vary when it comes to albums that only consist of cover songs and I can easily understand that. Some people totally dislike them, because the band that has recorded them often isn’t capable of adding their own trademarks to the songs or (even worse) totally fails to give them a worthy re-recording, which at least does the original justice. But in the case of Brazil’s HEADHUNTER D.C. you get exactly what a great cover album deserves. Good musicianship, good production and a band that honors the original songs instead of destroying them. All 14 tracks on here have previously already been released: on tribute albums, a vinyl 7″, a 10″ EP or as part of HEADHUNTER D.C.’s regular albums (mostly as bonus tracks on re-releases). But even if you should be such a die hard HEADHUNTER D.C. fan that already own every one of them, it’s still way cooler to have all of these songs on just one release that you can listen to in a row, instead of switching discs or vinyls all the time, don’t you think? And to all those of you who still call this just a cheap cash in release, let me tell you that “A Hail To The Ancient Ones…” is strictly limited to 300 copies and only available from the band and label, so I seriously doubt that it will make anyone rich. The digipak CD already impresses with a great cover artwork and the included booklet features liner notes to each of the songs, written by the band’s frontman Sérgio “Baloff” Borges. And when it comes to the most important part, the music, you’ll get to hear excellent versions of songs from IRON MAIDEN, BLACK SABBATH, BATHORY, MORTEM, SANCTIFIER, NECROVORE, THRASHMASSACRE (2 songs), MORBID ANGEL, SODOM, KREATOR, POSSESSED, SEPULTURA and DORSAL ATLÂNTICA. To mention real standouts is actually quite difficult as they are all done very well, but ‘To Tame A Land’ from IRON MAIDEN’s highly underrated “Piece Of Mind” album definitely was a positive surprise, since it was turned into a HEADHUNTER D.C. version, without loosing its original spirit, and the two THRASHMASSACRE songs are also real killers (and I don’t even know the originals). BATHORY’s ‘Total Destruction / Reap Of Evil’ and NECROVORE’s ‘Slaughtered Remains’ should be mentioned here as well again, since it’s such great versions for sure! And then there’s of course eternal classics as ‘Sodomy And Lust’ (SODOM), ‘Flag Of Hate’ (KREATOR), ‘Twisted Minds’ (POSSESSED) or ‘Morbid Visions’ (SPULTURA), which just fit HEADHUNTER D.C. perfectly! I could easily mention every single song here, but I think you got the point already. The only one which I wasn’t so much impressed by was BLACK SABBATH’s ‘Electric Funeral’. But not because HEADHUNTER D.C. did a bad version of it, not at all, it’s just that I grew up on the DIO era of BLACK SABBATH and therefore those songs are way closer to my heart than the classics they did with OZZY. So, to sum it up again: if you enjoy cover albums with a great selection of songs that have been recorded extremely well, “A Hail To The Ancient Ones…” should definitely be on your shopping list. All hail to the Death Cult! All hail HEADHUNTER D.C.! You can contact the band for ordering details via www.facebook.com/headhunterdc