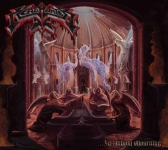 HEADHUNTER D.C. is again a criminally underrated band from Brazil – while the newcomers in its stead, such as KRISIUN and its followers namely ABHORRENCE, REBAELLIUN and NEPHASTH in particular, went on to phenomenal popularity, few of them could sustain it, with two of the three bands breaking up and others like OPHIOLATRY and IMPETUOUS RAGE couldn’t make too much of a mark, despite showing promise. There are those who try and sound brutal or old school and there are those who are inherently and certifiably so – HEADHUNTER D.C. which have been around since the very beginning is one of them. The music is inherently old school, from the SARCOFAGO roots to the early MORBID ANGEL influences, channeling the musical outputs of ACHERON and Floridian acts, HEADHUNTER D.C. isn’t as flamboyant or ambitious as the aforementioned bands. It’s not shocking anyone, except the Death Metal fans into having them believe the genuine quality of this band – they’ve got real riffs, controlled atmosphere reeking of evil, nothing over-the-top, this is the stuff that is lasting. The riffs are chunky, passionate and oozing with the underground essence, while the others try and take the sound forward and tire quickly – REBAELLIUN and ABHORRENCE, however, did something remarkable, especially the former with its mingling of MORBID ANGEL influences in a chaotic KRISIUN template. In Brazil, such comparisons are inevitable because not every band originating from that country has to sound like that band. There’s nothing bestial or chaotic, yet there is real extremity, intent and true Death Metal with palpable ominous atmosphere. There’s music that’s like fast food and there’s this which is prepared to consume slowly, take maximum pleasure in its carefully and deliberately structured and paced songs and it’ll be something you think of even the next day or years. It’s something that lingers in your mind, stands the test of time and doesn’t need unnecessary frills to grab your attention. That said, it’s about time this unheralded band comes to the limelight because time and again it’s proved its worth, its intrinsic value and Death Metal goodness. (Unlike the original Mutilation / Eternal Hatred Records digipak release, this European version comes as a regular jewel case edition, but instead features the additional bonus track ‘Summoned To Hell’, HEADHUNTER D.C.’s brilliant cover of the old MORTEM classic, which appeared on the limited edition "Death Rules Supreme – A Tribute To MORTEM" compilation from Heavier Records in 2011 – Frank). All further information at: www.facebook.com/headhunterdc, www.undercover-records.de 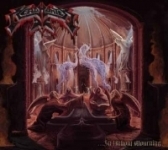 If you want Death Metal you’ve got it with Brazilian masters HEADHUNTER D.C.’s much anticipated new opus “…In Unholy Mourning…”. Still based upon such classic influences as old MORBID ANGEL, POSSESSED, SARCOFAGO, SEPULTURA, MASSACRE it’s Sérgio Baloff’s trademark vokills – I love that guy’s magnificent “oaaargggh” growls that sound like a moaning mummy in all these cheap horror flicks – which add that special something to the band’s powerful Metal of Death and by finding the right balance between catchy hooks, murderous riffs and captivating leads, sheer brutality fortunately never overpowers the skillfully structured songs. The fabulously titled “Hail The Metal Of Death!” and THRASH MASSACRE cover “Into The Nightmare” are my personal lows of the album, the first lacking a killer yell-a-long chorus, the Black / Thrash flair of the latter simply feels somewhat out of place and creates an irritating break to an otherwise very consistent album. Apart from that I would only vote for getting rid of the Black Metal rasps Sérgio utilizes ever since as I want him doing the mummy on every second of this record, haha! Why apply dynamics when you don’t need them? Well, that’s a trap VADER walked in with “Welcome…” recently as well. However, “Cursed Be Thou”, “Deny The Light” or “Unexorcised (Haunting Your Exorcist)” are prime examples of dark and occult Death Metal that offers enough fiery spirit and dedication to set whole hell ablaze. The production sounds a bit warmer than on its much lauded predecessor “God’s Spreading Cancer” and a killer artwork by Juanjo Castellano rounds off another sonic testimony to the unstoppable force of Death “fucking” Metal despite my minor complaints. 2012 seems to become another great year for Death Metal with DEGIAL, the new ASPHYX, COFFIN TEXTS, DISKORD, etc. and HEADHUNTER D.C. of corpse deserves to be added to this year’s shopping list as well. Get this! For all further info and ordering details check out www.headhunterdc.net, www.myspace.com/headhunterdc, www.mutilationrecords.com.br