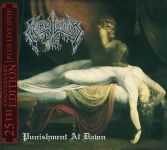 May Satan bless Cogumelo Records. Everybody who professes to be an extreme Metal fanatic knows the importance of this legendary label from Belo Horizonte, that between the ’80s and the ’90s brought the Brazilian extreme Metal underground into the world. Talking about Thrash Metal, Death Metal and Black Metal, I challenge anyone to say that Brazil wasn’t the birthplace of many cult bands and masterpieces, on a par with USA, Sweden etc. Many killer acts that invented a style of extreme Metal immediately recognizable, names such as: SARCÓFAGO, early SEPULTURA, ATTOMICA, MUTILATOR, HOLOCAUSTO, VULCANO, IMPURITY, SEXTRASH, EXPULSER, CHAKAL and HEADHUNTER D.C. The latter come from Salvador, the capital of the state of Bahia, and is one of the oldest Brazilian Death Metal bands. "Punishment At Dawn" is their second full length, originally recorded in 1993 and released by Cogumelo Records. This little gem of old school brutality has been re-released recently by another very active Brazilian label, Mutilation Records, in a special digipak edition, including some extra tracks and a bonus live DVD. A total of 75 minutes for 12 songs. The original album consists of eight tracks with lyrics that deal with horror, anti-christianity and hatred in a very old school and, at times, pretty cheesy way. The sound / production and the compositions are absolutely killer: a raw, savage, obscure and evil form of primitive Death / Thrash Metal. Imagine a mixture of SARCÓFAGO, SEPULTURA from "Morbid Visions", early MORBID ANGEL, POSSESSED on steroids, BLASPHEMY and early SODOM. The slow parts are well balanced with some mid tempos and many furious blastbeats accelerations. The whole album has a very dark and sinister atmosphere, starting from the fantastic cover artwork, that is a detail of the painting "The Nightmare" by Anglo-Swiss artist Henry Fuseli (1781). The songwriting is very solid with tons of twisted riffs and some very diabolic melodies during the tremolo accelerations, all enriched with some thrashier parts as well as a very rusty and sharp guitar sound. There are also some solos here and there. The winning formula of this album is simple, but very effective: hellish guitars, a blasting drums and sick growlings. Yeah, HEADHUNTER D.C. play fast and raw Death Metal in the purest South American tradition. The bonus tracks don’t add much value to the album: three live songs and a cover of ‘Morbid Visions’. When I listen to an album like "Punishment At Dawn", I feel like being in the middle of a Satanic ritual. This is a mandatory release, if you’re into Death Metal, Thrash Metal and Black Metal too. "Punishment At Dawn" is a killer example of bestial and primitive brutality set to music. The bonus DVD in this 25th Anniversary Edition features a HEADHUNTER D.C. live show from September 18, 1994, which was recorded at Concha Acústica in Salvador, Bahia when the band supported RATOS DE PORÃO. The setlist features 4 songs from "Punishment At Dawn", 3 songs from the previous album "Born…Suffer…Die" and a killer cover of BATHORY’s ‘Call From The Grave’ (total playing time: 40:39min). Additionally you’ll get an interview from a Brazilian TV Show from 1994, unfortunately in their native tongue (with no subtitles or anything), so that fans that don’t speak portuguese – like yours truly – won’t understand anything at all (playing time: 6:21min). A photo gallery with memorabilia from 1992 – 1995 (pictures, flyers, press features) complete the DVD. The quality of the live and interview footage on this DVD unfortunately is really poor since it was transfered from an old VHS video with lots of visual disturbances. But since it’s of big historical value and you basically get it for free when you purchase the "Punishment At Dawn" 25th Anniversary Edition, there’s nothing really to complain about. The band definitely was totally on fire at that time and the various camera angles make up for the rather weak overall recording quality. More band information at www.facebook.com/headhunterdc, label contact: www.mutilationrecords.com.br 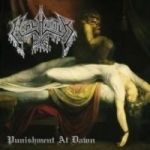 Death Metal for the true underground champions! What we have here is a lost Brazilian classic from 1993 finally re-released by Cogumelo. It’s a hard-as-nails slab of disciplined metallic violence shrouded in strange visions of the occult, mental illness, and violent death. Vintage morbid riffs abound, snug with tight electric bass, all strung over a bright, hammering snare drum alternating between on and off beat thrashes, slogging double bass guns, and lightning fills. Starts and stops are frequent (just like you crave to hear!) always with something new and brutal waiting. In the case of ‘Forgotten Existence’, a spare guitar lead springs up after four and a half minutes of skull pounding as a melodic phrase repeated high above a low droning chord like something BOLT THROWER (or JUDAS PRIEST) might accomplish as the drummer gradually builds intensity to a blast. Perfect! The drummer has a neat technique of speeding up or slowing down the double bass drum rolls during sections, which is awesomely brutal. It feels like ASPHYX dragging and stretching out your entrails. Yet, overall, the drummer’s performance is much more like early Steve Asheim, which means impeccable timing and arrangements that are catchy and chaotic. Exclusively on-beat blasting sections remind the listener that yes, there can be no doubt, I am in the midst of the elite Brazilian Death. An inimitable early ‘90s sounding Death Metal production sounds clear yet dark. There are a few keyboard intros and a lone melancholic acoustic guitar outro for atmospheric effect. Riffs roll and swell, inducing headbang mania and metal derangement. Thundering low vocal emboldens the obscure and rarefied character of this material and instills a sense of foreboding, while the occasional, higher-pitched, snarling voice acidifies with scorn and sickness. Guitar shred emerges and recedes up and down the fretboard appealingly. I’m so happy not to hear the lame sweeps that characterize so much of today’s sound. Roaring apocryphal utterances and morbid lyrics claiming confusion of the mind create sickness. In sickness we dwell. Total sickness. Total death. For more information, or to possess this work of damnation for your own collection, visit www.headhunterdc.net, www.myspace.com/headhunterdc, www.cogumelo.com. Also, it’s worth mentioning that this re-issue includes an early SEPULTURA cover (‘Morbid Visions’) and three live tracks, including the above-mentioned ‘Forgotten Existence’ concluded with brain-melting guitar solos!