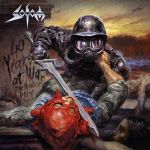 “My real wish would have been a live album, but due to the pandemic there was absolutely no chance to record one“, Tom Angelripper admits when he’s asked how they came to this idea which now has manifested as an album and huge and really excellent equipped box-set, coming along to the 40th anniversary of good old coal-miners Thrash Metal band SODOM. With the actual line-up they decided to re-record one song out of every album, that SODOM made over all these years. A decision Tom won’t regret, because the whole thing entered the German album charts lately at number six. “The highest chart-position ever in the band’s career“, he considers hearable stunned. The goal was to avoid the wellknown and outstanding classics, that almost every album had, but to focus on songs which have not been heard or been played live for a long time. So, do the SODOM of today give these songs something, which they didn’t have back in the days? Actually, they really do! ‘After The Deluge’ appears more nasty with its crusty guitar it has nowadays, while the following double ‘Electrocution’ and ‘Baptism Of Fire’ with the unusual sound of two guitars even places undreamt of qualities on the turntable. Unfortunately, this does not work in all cases: ‘Better Off Dead’ sounds more aggressive on the original than the new variant, with ‘Body Parts’ it balances out. The Punk / crowbar period of the band sounds even a bit fresher nowadays. Which should encourage us to rediscover dusty records like “Masquerade In Blood” or “Til Death Do Us Unite”. At a time when Tom worked with Bernemann, Bobby and later Makka, writing music with some really nasty SLAYER edge, there are also one or two dropouts between cool new recordings like ‘Book Burning’ or ‘In War And Pieces’. Rediscovering the hellish brutal “Code Red” album is also pretty much fun as well as putting on one of their best albums ever: “Decision Day“. Facing the new version, one needs to say that ‘Caligula’ apparently can only be done differently – but not better. The most luxury equipped edition, simply called ‘fan-box’ contains double vinyl, CD, poster and sticker, signed autograph card and a cassette with an exclusive re-recording of the track ‘Equinox’. On top an extra EP, which contains the new song ‘1982’, as well as re-recordings from the legendary “Witching Metal “demo tape, which back in 1983 was extremely inspired by VENOM, TANK and MOTÖRHEAD. Not to let the book be unmentioned: a 72 paged monster in longplayer size, telling the band’s story, publishing many pictures yet unseen and – which I think is genius, showing the bond SODOM have and always had with their fans – comments of the fans, even in different languages. This album / box-set is a mighty demonstration to all those voices, who want to deny SODOM’s ability to change. Within the self-imposed limits, Angelripper and his respective comrades-in-arms have reinvented themselves again and again over a period of 40 years. Cheers! May there be many decades of Sodomania still to come. More info at: www.facebook.com/sodomized, www.facebook.com/spvsteamhammer