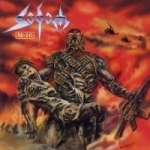 After Wacken Uncle Tom and Co. continue celebrating 20 years of sodomy and lust in the sign of evil with their eleventh full length entitled “M-16”. Once again they’re dealing with the Vietnam topic. And as both KREATOR as well as DESTRUCTION released some real good Thrash this year, SODOM stick to their roots, so the forthcoming tour of the three veterans in Germany probably won’t disappoint anybody (hey, even Frank is considering to actually leave the house for this tour!) (ho-ho, verrrry funny Mr.Claassen, verrry funny! – F.). Personally, I think the recent SODOM line up is almost too perfect, though, as I will always like the old stuff, but apart from this, “M-16” is probably their best album since “Agent Orange” and I’m having great fun with this one. So after purchasing the new KREATOR album (it RULES) you should go for for SODOM as well, great party album! We got what we deserve!