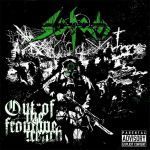 SODOM
Out Of The Frontline Trench
(Steamhammer Records / SPV)
28:45min

SODOM is now a four piece unit of war. They have not only rejoined with mighty Frank Blackfire, (who was an important part in some of SODOM’s better moments), they also added a second guitar player (which is quite new for these German veterans) and a new drummer Husky (ex – DESASTER, ASPHYX), who’s a veteran himself already. This new material proves that from the 3 big ones of German Thrash, SODOM are clearly the ones that are coming up with material as strong as ever. As a matter of fact, I think they have never done a bad album per-se, just a few of them were kinda Hardcore sounding, but there are always goods songs in there, and Tom Angelripper always finds a way to change a bit when it is needed. The first 3 new songs are just pure brutal Thrash, verging on Death and Black Metal at times, but still purely SODOM. Yes, I feel a bit of the “Agent Orange” aura, and that my friends, can only be good. They have maintained the lyrical theme of war (now I wonder why they have never been called War Metal, although they have been touching the theme longer and better than many bands that carry that name… ok, yes they are less noisy, I guess it’s that). The re-recorded version of ‘Agent Orange’ is actually quite good, I guess that the original still stands as the best one, but then again the new members have given the band a strong stamina impulse. And the live version of ‘Bombenhagel’ is also a good addition. Yet , if this is a teaser of things to come, SODOM will surely come with an album worthy again of putting them in the heavens (or hells) of extreme Metal. www.facebook.com/sodomized, www.spv.de