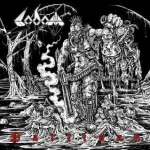 I have great expectations in the upcoming SODOM full length, since it will mark the comeback of Frank Blackfire, who is responsible for the guitarwork on two of the best Teutonic Thrash Metal albums of all time: “Persecution Mania” and “Agent Orange”. In order to make the waiting easier, SODOM has just released a new EP containing two new songs and a live track. If ‘Partisan’ can give us some sort of preview of how the new album will be, I have to admit that I’m a little disappointed. First of all, the best track on the EP is the live version of ‘Tired And Red’, recorded by the new line-up at the 2018 edition of the Rock Hard Festival in Gelsenkirchen. So, the best song in a 2018 release is still one from 1989: awesome! Moving on to the new tracks, neither ‘Partisan’ nor ‘Conflagration’ impressed me. These songs have nothing to do with the old Blackfire compositions from the late ‘80s. These new tracks are very reminiscent of the SODOM’s more punkish albums (“Get What You Deserve”, “Masquerade In Blood” and “‘Til Death Do Us Unite”). Most of the songs are characterized by some pretty groovy D-Beat tempos and a small handful of catchy Thrash / Punk riffs. Then we have a couple of slowdowns and mid-tempo interludes, one of them very very melodic on the first song. The overall result is not bad, because both tracks are surely headbanging. Then we have Tom’s typical raucous vocals that, along with Blackfire’s guitar solos, emerge as one of the highlights. What I haven’t really liked is the drumming: too simplistic, flat and sloppy. The double bass is rarely played, except for a slowdown and few triplets. This is Husky’s formula: D-Beat, D-Beat and more D-Beat. Ah no, in the last seconds of ‘Conflagration’ there is a short acceleration with euroblasts, but it’s nothing memorable. Also the front cover artwork has a strong Punk / Crust feel. In conclusion: a not very convincing EP. Let’s wait for the album, hopefully, it will be more brutal and less punky. www.facebook.com/sodomized, www.spv.de